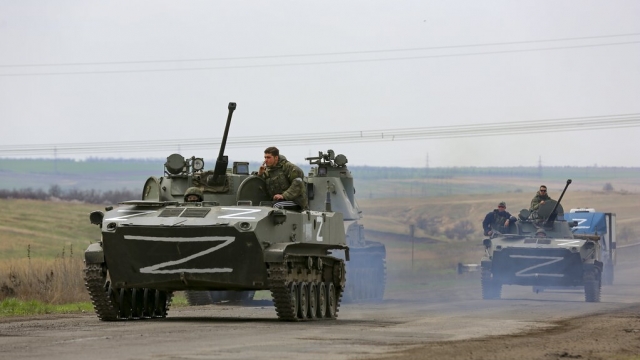 Russian President Vladimir Putin tried to claim victory in the strategic port of Mariupol on Thursday, even as he ordered his troops not to storm the last pocket of Ukrainian resistance in the war's iconic battleground.

Russian troops have besieged the southeastern city since the early days of the conflict and largely pulverized it — and top officials have repeatedly indicated it was about to fall, but Ukrainian forces stubbornly held on. In recent weeks, they holed up in a sprawling steel plant, and Russian forces pounded the industrial site and repeatedly issued ultimatums ordering the defenders to surrender.

"The completion of combat work to liberate Mariupol is a success," Putin said. "Putting such an important center in the south as Mariupol under control is a success."

But the Russian leader said that, for now, he would not risk sending troops into the warren of tunnels under the giant Azovstal plant, instead preferring to isolate the holdouts who have captivated the world's attention "so that not even a fly comes through." His defense minister said the plant was blocked off, while giving yet another prediction that the site could be taken in days.

Putin's order may mean that Russian officials are hoping they can wait for the defenders to surrender after running out of food or ammunition. Bombings of the plant could well continue. 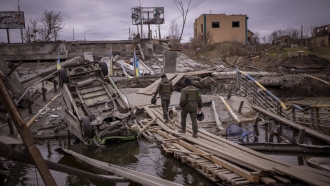 Some 5 Million Refugees Flee Ukraine In Less Than 2 Months

Even though Putin painted the mission to take Mariupol already a success and said the city had been "liberated," until the plant falls, he cannot declare a complete victory.

Russian Defense Minister Sergei Shoigu said about 2,000 Ukrainian troops remained in the plant, which has a labyrinth of tunnels and bunkers that spread out across about 4 square miles. Ukrainian President Volodymyr Zelenskyy said that about 1,000 civilians were also trapped there.

Russian-backed separatists in the area previously seemed bent on taking every last inch of the city, which has seen some of the most dramatic fighting of the war and whose capture has both strategic and symbolic importance.

The scale of suffering in the city on the Azov Sea has made it a worldwide focal point, and its definitive fall would deprive Ukraine of a vital port, complete a land bridge between Russia and the Crimean Peninsula, which Moscow seized in 2014, and free up Russian troops to move elsewhere in the Donbas.

Russian officials now say capturing the Donbas, Ukraine's eastern industrial heartland, is the war's main goal. This week, Moscow's forces opened a new phase of the war, in a deadly drive along a front from the northeastern city of Kharkiv to the Azov Sea. Detaching the region from the rest of Ukraine would give Putin a badly needed victory two months into the war, after the botched attempt to storm the capital, Kyiv, and amid mounting Russian losses.

Britain's Defense Ministry said that Russia likely wants to demonstrate significant successes ahead of Victory Day on May 9, the proudest moment on the annual calendar marking its critical role in winning World War II.

"This could affect how quickly and forcefully they attempt to conduct operations in the run-up to this date," the ministry said. 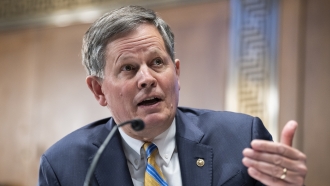 Is Putin A Terrorist? The First U.S. Senator To Visit Ukraine Says Yes

Retired British Rear Admiral Chris Parry described Putin's remarks as reflecting a change in "operational approach" as Russia tries to learn from its failures in the eight-week conflict, which turned from initial hopes of a lightning fast invasion of a neighbor into a war of attrition with ever mounting casualties and costs.

"It seems to me that the Russian agenda now is not to capture these really difficult places where the Ukrainians can hold out in the urban centers, but to try and capture territory and also to encircle the Ukrainian forces and declare a huge victory," Parry said.

In the meantime, Western powers are doubling down on their support of Ukraine, moving to push more military hardware in, heightening geopolitical stakes.

The latest in a long line of Western leaders venturing to Kyiv, Danish Prime Minister Mette Frederiksen said Thursday: "One of the most important messages today is that Denmark is considering sending more weapons. That is what is needed."

With global tensions running high, Russia reported the first successful test launch of a new type of intercontinental ballistic missile, the Sarmat, on Wednesday. Putin boasted that it can overcome any missile defense system and make those who threaten Russia "think twice." The head of the Russian state aerospace agency called the launch out of northern Russia "a present to NATO."

The Pentagon described the test as "routine" and said it wasn't considered a threat.

On the battlefield, Ukraine said Moscow continued to mount assaults across the east, probing for weak points in Ukrainian defensive lines. Russia said it launched hundreds of missile and air attacks on targets that included concentrations of troops and vehicles.

The Kremlin's stated goal is the capture of the Donbas, the mostly Russian-speaking eastern region that is home to coal mines, metal plants and heavy-equipment factories.

In a video address, Zelenskyy said the Russians were not "abandoning their attempts to score at least some victory by launching a new, large-scale offensive."

The Luhansk governor said Russian forces control 80% of his region, which is one of two that make up the Donbas. Before Russia invaded on Feb. 24, the Kyiv government controlled 60% of the Luhansk region.

Analysts have said the offensive in the east could become a war of attrition as Russia faces Ukraine's most experienced, battle-hardened troops, who have fought pro-Moscow separatists in the Donbas for eight years.

Russia said it presented Ukraine with a draft document outlining its demands for ending the conflict — days after Putin said the talks were at a "dead end."

Moscow has long demanded Ukraine drop any bid to join NATO. Ukraine has said it would agree to that in return for security guarantees from other countries. Other sources of tension include the status of both the Crimean Peninsula, seized by Moscow in 2014, and eastern Ukraine, where the separatists have declared independent republics recognized by Russia.