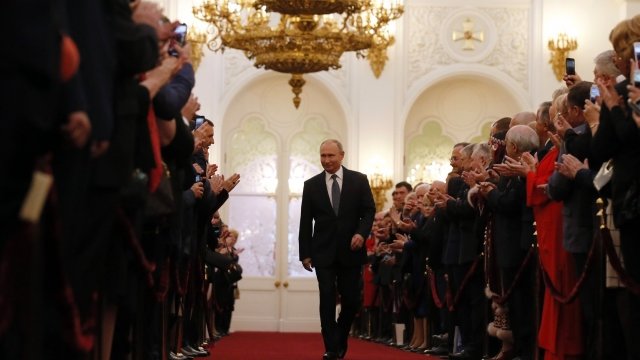 SMS
Putin To Focus On Social, Economic Reforms In 4th Presidential Term
By Jake Jones
By Jake Jones
May 8, 2018
He wants to cut poverty in half and make Russia the world's fifth-largest economy, for starters.
SHOW TRANSCRIPT

Putin signed a decree shortly after his inauguration to another six-year term. It directs the Russian government to focus on a number of economic and social goals, including cutting poverty in half, making Russia the world's fifth-largest economy and increasing the country's population and average life expectancy.

The decree follows a report showing Russia's military spending fell for the first time since Putin took office nearly 20 years ago. That spending was on display in recent years when Russia's military got involved in Ukraine and Syria.

While Putin maintains a high approval rating and is credited with bringing Russia back as a major global player, there were protests before his inaugurations this year and back in 2012.

Putin's goals are ambitious and projected to cost around $126 billion.