Putin Stands By China, Criticizes US At Economic Forum 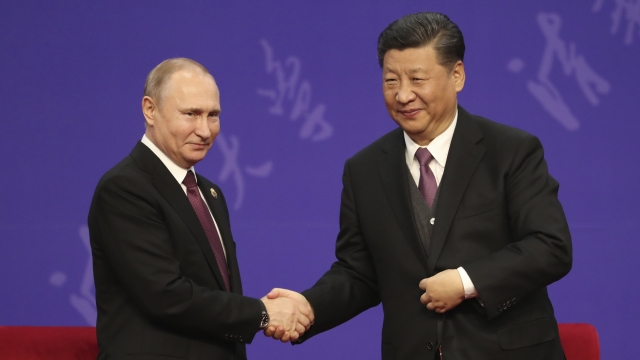 Chinese President Xi Jinping and Russian President Vladimir Putin both hinted at U.S. global dominance — and not in a good way — at the St. Petersburg International Economic Forum on Friday.

Putin invited Xi to Russia as the guest of honor at the forum amid the ongoing trade war between China and the U.S. Putin said Friday that "economic selfishness" leads to trade wars and more.

"The policy of unlimited economic selfishness and pushing this policy with force is a path towards endless conflicts, trade wars — maybe not only trade wars, fighting where no rules apply, everyone against everyone," Putin said.

Tensions between the U.S. and China have been growing in recent months. That's partly because the U.S. has banned Huawei equipment from its 5G networks and urged its allies to do the same — it considers Huawei tech a threat to national security.

China and Russia have already struck a deal to develop a 5G network in Russia. Huawei and Russia's top cellular company, MTS, are working together to make it happen. At the economic forum, Xi said China will continue to maintain a close relationship with Russia and swap economic and technological knowledge.