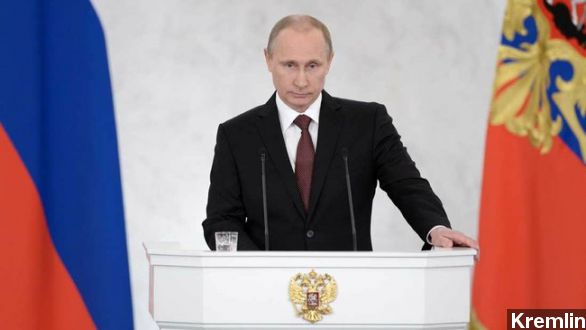 By Elizabeth Hagedorn
March 18, 2014
In a speech to both houses of Russia's parliament Tuesday, President Vladimir Putin signed a draft treaty for Crimea's annexation.
SHOW TRANSCRIPT

In a speech to Russia’s parliament Tuesday, Putin said he was correcting a "historical injustice" — noting more than 96 percent of Crimeans had voted to break away from Ukraine. (Via BBC)

The newly installed government in Kiev, along with the West, was quick to condemn the vote as a sham — pointing out it not only violated Ukraine’s constitution but the presence of Russian troops and media censorship made for an unfair referendum. (Via Euronews, Channel 4)

But Putin says the vote was both legal and binding. He also accused the West of a double standard — citing U.S. military interventions in Iraq, Afghanistan and Libya. (Via ITN)

Putin's announcement, of course, is not likely to sit well with the U.S. or its European allies. On Monday, both imposed sanctions. (Via The White House)

Washington slapped seven members of Putin's inner circle with travel bans and asset freezes — though the move was shrugged off in Moscow.

Russia’s deputy prime minister — who was sanctioned himself — tweeted: “Feels like some clown wrote the U.S. president’s order.” (Via Twitter / @Rogozin)

​Now, Crimea joining with Russia isn't a done deal yet. The bill must first be approved by Russia's constitutional court and then get ratified by the parliament — but at this point, those steps are mere formalities.