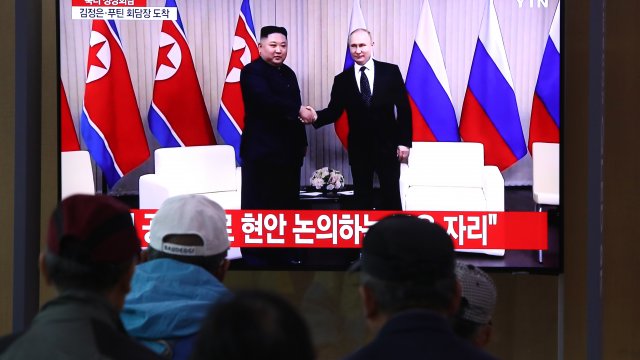 After his very first meeting with Kim Jong-un, Russian President Vladimir Putin says the North Korean leader wants to denuclearize — but not without certain guarantees in place.

Putin told reporters Thursday he and Kim talked about moving Pyongyang toward denuclearization. But Kim said he won't proceed without security guarantees. It's unclear exactly what those guarantees would be.

The Associated Press quotes Putin as saying: "Above all, he focuses on protecting national interests and security."

As Newsy previously reported, a U.S. envoy traveled to Moscow last week to discuss the denuclearization of North Korea. President Donald Trump and Kim have met a couple of times in the past year.

The first summit ended with a vague agreement for denuclearization, but the second failed after the two countries couldn't make a deal. Kim gave the U.S. until the end of the year to decide if it wants a third summit. President Trump said it would be "good."

Putin said Thursday he will speak with President Trump about what he and Kim discussed during the summit, adding there are "no secrets."