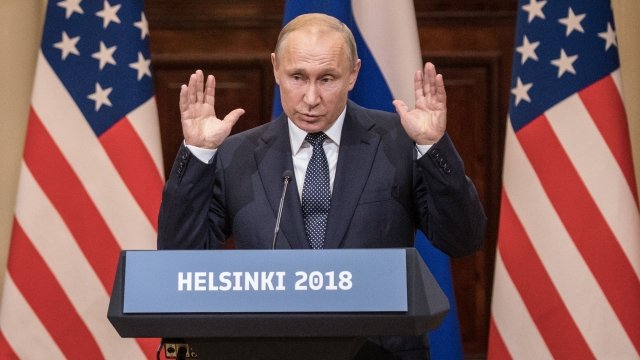 "Could you name a single fact that would definitively prove the collusion?" Putin said. "These are nonsense."

"The Russian state has never interfered and is not going to interfere into internal American affairs, including the election process," Putin said.

Last week, Trump told reporters he would address Russian meddling with Putin during their bilateral summit.

At the press conference following Trump's one-on-one meeting with Putin, Trump said they "spent a great deal of time talking about it."

At one point, Putin offered to help the U.S. with special counsel Robert Mueller's investigation into the election meddling.

He said he would let U.S. officials come to Russia and be present while Russian officials questioned people of interest in the case. Putin pointed to an already established treaty between the U.S. and Russia. But in order to get Russia's help, the U.S. would have to reciprocate those actions.

When asked whether Trump believes U.S. intelligence agencies over Putin when it comes to election meddling, Trump said he didn't have reason to believe "why it would be" Russia.