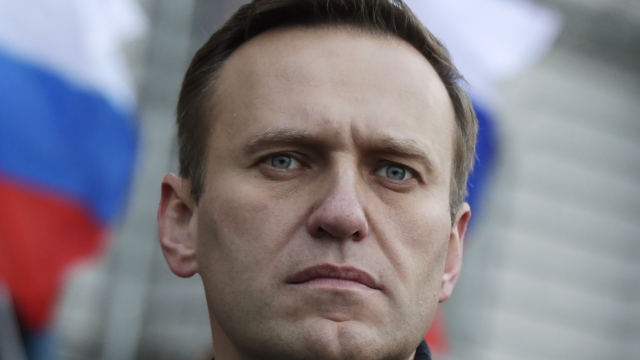 Alexei Navalny, one of Russian President Vladimir Putin’s biggest foes, spent Thursday fighting for his life — and his spokesperson is blaming Putin.

Kira Yarmysh says Navalny, 44, drank tea in the morning, and began feeling sick on a flight from the Siberian city of Tomsk to Moscow. Video from the plane captured his painful moans, before the pilot made an emergency landing in the southern city of Omsk where he was taken to a small hospital.

"He was, has been fearless. And he is paying for that," says Daniel Fried.

An ambassador who served in both President Clinton's and President Bush's National Security Councils and coordinated sanctions on Russia after it invaded Ukraine, Fried says Putin uses assassinations as a political weapon.

The real-time tweets from Navalny’s spokesperson paint a desperate picture: evasive responses from hospital staff, Navalny’s wife and doctor being denied access to seeing him, authorities trying to confiscate his belongings, and the hospital refusing to transport him. U.S.-based opposition activist Natalia Arno says that’s because the hospital’s head physician is a local deputy from Putin’s party, United Russia.

"The deputy head of the clinic, he will say that ‘Obviously, it's not a deliberate poisoning.’ And so, again, they're trying to have this narrative from the very first minutes," says Arno.

Navalny called on Russians to oppose Putin’s bid to reform the constitution and remain in power until 2036, a referendum that passed in July.

The incident is not the first time the opposition figure has been targeted — Navalny has been jailed, attacked, and previously hospitalized for what officials called an “allergic reaction.”

A series of Kremlin critics have been poisoned — among them, former spy Alexander Litvinenko, who died in London after drinking tea laced with radioactive polonium. Former double agent Sergei Skripal who was hospitalized with his daughter after coming in contact with nerve agent Novichok. And opposition activist Vladimir Kara-Murza, who survived poisonings in 2015 and 2017 — and currently works with Arno.

"And it was a miracle that he survived," she says.

Kremlin spokesperson Dmitry Peskov told reporters authorities are waiting for test results and “if a poisoning took place... there will be an investigation.”

Even Edward Snowden, who sought asylum in Russia, weighed in — saying “If confirmed, it is a crime against the whole of Russia. There can be no democracy without dissent.” — as U.S. lawmakers called for perpetrators to be held accountable.

"Putin has basically appointed himself president for life. There are a lot of Russians who don't like this," says Fried. "I think the opposition will continue no matter what happens with Navalny."

Navalny remains in a coma, connected to a ventilator.

"We understand that we are the biggest enemies of the Kremlin. And so we are expecting things like that," says Arno.