Put Away Your Smartphone; Your Kids' Health Might Depend On It 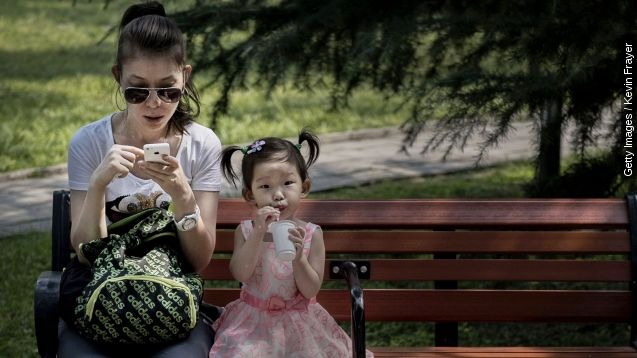 SMS
Put Away Your Smartphone; Your Kids' Health Might Depend On It
By Matt Moreno
By Matt Moreno
January 7, 2016
A recent study suggests that children who receive "fragmented" attention from their mothers might develop emotional problems in the future.
SHOW TRANSCRIPT

We know children require a lot of attention, but what happens if you don't pay attention to how much attention you're really giving them?

A new study out of the University of California, Irvine says devoting more attention to your smartphones than your children could mean they'll have improper brain development and emotional disorders later in life.

The study, published in the journal Translational Psychiatry, looked at two groups of rats: one group in normal, caged conditions and the other in more chaotic conditions. While maternal care for both groups was similar, the chaotic conditions had mothers displaying unpredictable behavior. (Video via Understanding Animal Research)

The distracted mother's rodent pups showed little interest in sweet foods or playing with others — two signs of the pups' inability to experience pleasure.

The researchers suggest in human children neglect might lead to risky behavior, including drugs and alcohol, and can lead to depression later in life.

The mother rats, of course, weren't busy on their cellphones, but the researchers say the study shows, "It is not how much maternal care that influences adolescent behavior but the avoidance of fragmented and unpredictable care that is crucial."

The researchers say it all boils down to the brain's dopamine receptors. The more undivided attention and reliable patterns, the happier your kids will be.

This video includes images from Getty Images and Alan Levine / CC BY 2.0.