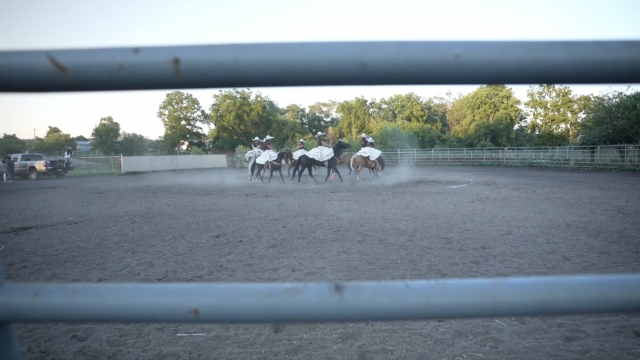 SMS
A Push For Inclusive Representation In Mexico's National Sport
By Jesse Cohen
By Jesse Cohen
October 4, 2022
Escaramuza Charra is Mexico's only all-female event in the rodeo-like sport of charrería.

When it comes to tradition it's not easy to create change, especially when that tradition comes from hundreds of years of history.

That's the case for Mexico's Charrería, a Mexican rodeo. One team is holding onto the culture while trying to make the sport more inclusive.

Marked by a cloudless blue sky, optimism is in the air. Positivity about the future is a driving force for this team, but their dedication to change is what's altering Mexico's national sport, in Iowa of all places. Escaramuza Charra is Mexico's only all-female event in the rodeo-like sport of charrería.

"We kind of just started practicing in January of this year. We are a very young team," said Alejandra Pina, the captain and founder of Escaramuza Quetzalli. "It is very traditional, there's a lot of rules to it. The feminine side is very very detailed, there is a rule book, every year it's updated."

In the United States, 16 states are members of the Federación Mexicana de Charrería. Escaramuza Quetzalli is a team based in Iowa, that says while they follow those rules, they simultaneously try to modernize them.

"At first it can be scary, even for me I rode horses for a while until I came here and I still had the tools to ride a horse, but not like the way they ride a horse," said Tyler De Leon, a member of this team.

A young, gay Filipino man Pino says is not someone you often see on what's traditionally a female team.

"The rulebook says you have to be born a female to be in the female field of charrería," Pina said.

It's a rule De Leon didn't know he would be able to break, but he and the team are pushing boundaries beyond what's always been done.

"Four years ago I watched a documentary on Escaramuza and it was actually a team we faced in Chicago which was like so full circle for me because I got to see the lady in the film, who I was like I want to be you," De Leon said. "I watched it and I was just like mesmerized by the art form basically."

Yet here he is, just as much a part of the team as any of the female riders.

"They treated me...more than I could ask for," De Leon said. "It feels liberating."

It's emotional for someone like De Leon to be given this chance. This sport is rooted in years and generations of strict rules, especially for women.

"You don't really see your collarbone, you don't see your ankles, you barely see your wrists so everything is very traditional and It's very detailed to the touch, versus the male side is not that detailed," Pina said.

They are giving opportunities Pina says, you rarely see given to other gay men in Mexico.

"They coach because they can't ride, unfortunately, but here with Tyler, we're giving him the opportunity to do whatever he wants with this," Pina said.

In this arena, many rules are followed, but others are broken to expand representation.

"It doesn't matter what gender you are, the only thing that matters is your riding skill," Pina said.

"I just hope that our team, any team, can go to Mexico or go to competitions in the states even, without being looked at if they have a member of any difference," De Leon said.