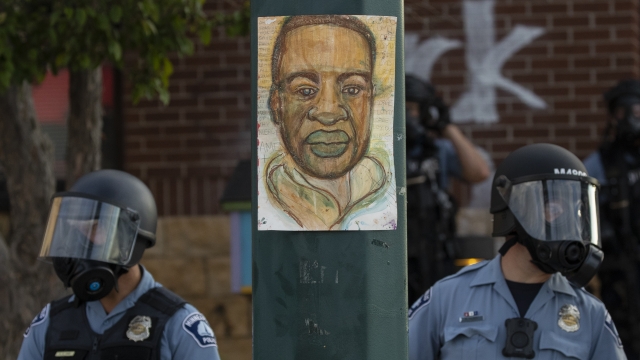 SMS
The Push For Police Reform On 2nd Anniversary Of Floyd's Death
By Jamal Andress
By Jamal Andress
May 25, 2022
In the absence of Congressional legislation, President Biden has signaled his plans for a set of executive orders aimed at reform.

Wednesday marks two years since George Floyd was murdered under the knee of a Minneapolis police officer.

Since Floyd's death, all the officers involved have been found guilty of criminal charges but broad reform in Floyd's name has been harder to come by.

Sen. Cory Booker was one of the principal negotiators working to pass the 'George Floyd Justice in Policing Act' — a sweeping federal police reform bill that covered things like qualified immunity, police prosecution, and a police misconduct registry.

"We cannot stop advocating for comprehensive police reform in our country," Booker said.

Newsy sat down with the New Jersey lawmaker the day after it was announced that the bill wouldn't pass the Senate.

NEWSY'S JAMAL ANDRESS: The George Floyd video sent, by some estimates, the most people into the street to demonstrate ever in the history of our country. I guess my question there is, what do you say to those millions of folks now that the George Floyd Justice in Policing Act has kind of died on the Senate floor?

SEN. CORY BOOKER: Police leadership, major county police chiefs and police unions all say we don't need this patchwork of convoluted laws, we should have some high professional standards that are the norm in America. So this is a conclusion that many people are drawing to, but unfortunately … it often takes time. ... Change doesn't come from Washington. Usually, it comes to Washington by indefatigable, tireless warriors of love who do not stop working despite defeat or setback or stumble along the road to justice.

In the absence of Congressional legislation, President Biden has signaled his plans for a set of executive orders aimed at reform.

"The answer is not to abandon the streets. Not to choose between safety and equal justice. And we should agree it's not to defund the police," he said.

But some reform experts say the most impactful change isn't going to come from the president's pen.

Nila Bala is the legislative director for the NYU Policing Project, which works with local law enforcement across the country on reforms.

Small reform measures like banning chokeholds and improving data collection have been implemented widely, but larger structural changes have been less popular.

Bala says rising gun violence has been one of the biggest obstacles.

"When people are scared and fearful, they're seeing crime in their neighborhood," she said. "They want there to be a response and it's easy to say, 'Well, the response is, we have to roll back the reforms we made.'"

2021 was a record year for police gun violence. According to The Washington Post, police shot and killed 1,055 people in 2021. That's the highest it's been since the paper started keeping track in 2015.