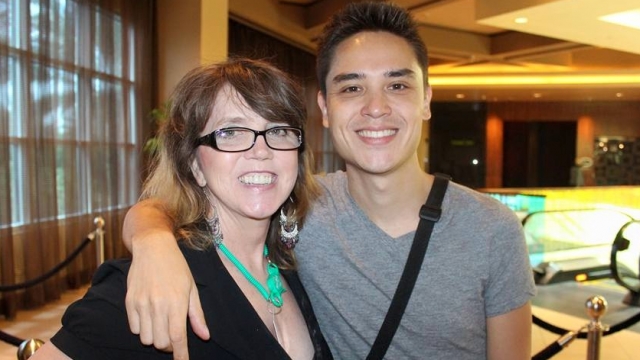 SMS
Pulse Shooting Victim's Mother Calls For Ban On Assault Weapons
By Cody LaGrow
By Cody LaGrow
June 9, 2017
Christine Leinonen — mother of Christopher Andrew Leinonen —is now advocating on behalf of her son who was killed in the Pulse nightclub shooting.
SHOW TRANSCRIPT

"He was so easy to love. He was easygoing. He was happy. He was funny. He was goofy," she said. "We were the Chris Leinonen team. Which is cool when you're 7. When you're 14, it's not so cool anymore."

Her son went on to be a successful therapist who fell in love with a man named Juan Ramon Guerrero. And one night, the young couple decided to go dancing at a place they often went to: Pulse nightclub in Orlando, Florida. But Leinonen made sure to check in with his mother before.

"Every phone conversation, I always ended with, 'I love you, Chris.' And he'd say, 'I love you, too, Mom!' explained Christine Leinonen.

It was the type of love only a mother could know: proud and protective. The type that would unravel any parent if something bad happened to their child — an experience Leinonen lived through in front of the entire world on ABC News.

"For the moms out there who have gay sons, and they saw me desperate to just, just spend one more second with my gay son — what I wouldn't do to find out that he was alive, or even if I had to switch places, so that he could be alive and I would be ... not around. I'm sure a lot of moms just put their foot down and just said, 'I need my son. I need my son around me. I need to have a loving relationship with my son. I don't care whether they're gay or straight, married or single, whether they want to have kids or don't want to have kids,'" explained Leinonen.

Leinonen says tragedy has reshaped her life — turning her anguish into activism. A month after her son's murder, she advocated for gun safety at the 2016 Democratic National Convention, and then she continued telling his story across the globe.

Forty-nine people died and 53 were injured in the Pulse shooting — the deadliest in modern American history.

"We're not going to stand by with all these laws that are just open, free to anyone getting a gun," Parra said.

Parra and David Moran gathered with Gays Against Guns outside Pulse on the morning the OnePulse Foundation announced how it will memorialize the site of the shooting.

"You're not only dealing with trying to be an activist to address racism and LGBT equality, but also gun safety and weapons control; you're also traumatized. You're grieving. But we can't let that allow for there not to be conversations about changing the fact that someone legally went into a store and bought an assault rifle and then drove up here and murdered people," Moran explained.

Here's a look at what Florida lawmakers proposed this legislative session: Democrats wanted mental health screenings for those applying for a concealed-weapons permit and a ban on assault weapons. Neither of those passed.

Republicans expanded the "stand your ground" law and made it easier to claim self-defense in pretrial hearings. Republican state Sen. Greg Steube alone put forth 10 gun proposals — including one that would have eliminated gun-free zones altogether for concealed-weapons permit holders. Those include K-12 schools, courthouses, athletic events and establishments that serve alcohol — like Pulse nightclub and airport passenger terminals.

This idea was presented after a January 2017 mass shooting inside Ft. Lauderdale-Hollywood International Airport that killed five people and injured six others.

These proposals failed due to more moderate Republicans like Anitere Flores, who spoke out against reducing traditional gun-free zones — which relieves people like Moran.

"Surprisingly, it's been somewhat encouraging to see that it just didn't go through. And you wonder — I've heard Christine Leinonen, Drew's mom, say if he couldn't have been able to buy that gun, maybe he wouldn't have done it," Moran pondered.

Leinonen wants a ban on assault weapons — the type that killed her son. She said: "There are weapons out there you can have for your protection and hunting. This assault weapon with the high-capacity clips only has one purpose, and that's to maximize carnage — and that's what mass shooters want to do. They want notoriety."

As an attorney and former law enforcement officer, Leinonen said she embraces the Second Amendment and doesn't want to take guns away.

Days after the Pulse shooting, Connecticut Sen. Chris Murphy — who was elected into office just weeks before the Sandy Hook Elementary School shooting in 2012 — filibustered the Senate for 15 hours along with 40 Democrats. The filibuster ended after Republicans agreed to allow votes on gun control.

Democrats proposed this: Block anyone on the terrorist watch list or any other federal terrorism database from purchasing guns or explosives; and expand background checks to include guns purchased online or at gun shows. Republicans then proposed a 72-hour hold on gun purchases by those on the terror watch list, more specific definitions of mental illnesses that would disqualify people from buying guns, and improvements to the current background check system rather than expansion of it. Nothing came of it.

The American Medical Association called gun violence a public health crisis, estimating 30,000 people die each year at the barrel of a gun.

Still, the U.S. has seen zero gun laws emerge that would have prevented a man — who was once investigated for possible terrorist ties — from legally purchasing a Sig Sauer AR-15-style assault rifle and a Glock and then killing 49 people and injuring 53 others in a matter of minutes.

The lack of laws is disheartening for Leinonen.

"I don't have any real hope that most of our elected officials are going to serve the majority of people. I don't feel any hope for that. Thanks to these ridiculous gun laws, thanks to that, now my son cannot do the things on his bucket list. Christopher wanted to go to Germany. He wanted to go to Japan. He wanted to get married. He wanted to have kids. And because of these gun laws, he can't. So he's been denied something that you yourself want for your family. That's how easy you are denied that. One guy with one gun," Leinonen said.

Leinonen has heard the argument that if more people had more guns in the nightclub, perhaps her son may still be alive. She doubled-down on what she thinks is the real solution.