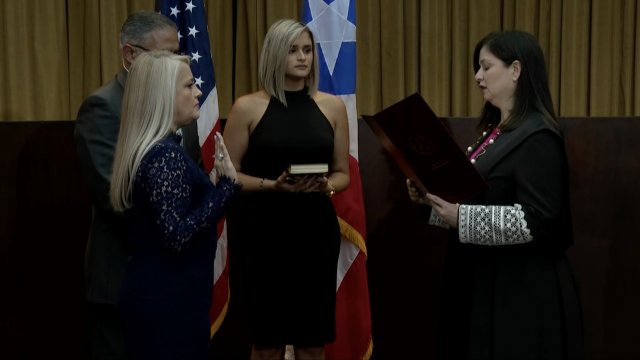 When Wanda Vázquez was sworn in as Puerto Rico's new governor, she inherited a mountain of financial and political issues from her predecessor.

Perhaps the biggest problem Vázquez now faces is Puerto Rico's ongoing debt crisis. It started back in 2015, when the island said it was unable to pay back $72 billion in debt. And in May 2017, it declared a form of bankruptcy.

Officials have been working for several years to restructure Puerto Rico's massive debt. But a clear resolution is still a long way off.

On top of that, Puerto Rico is still recovering from Hurricane Maria, which left hundreds of people dead and caused massive damage in 2017.

The storm also dealt a lasting blow to the economy. After Maria hit, Puerto Rico's tourism sector — a vital source of income — took a nosedive. Even today, the unemployment rate is high and many residents are living in poverty.

Yet another issue on Gov. Vázquez's plate is corruption. Last month, two former Puerto Rican officials were arrested, alongside four other people, on charges of wire fraud and money laundering. Court documents allege the six defendants were part of a corruption scheme involving $15 million in federal funds.

Add all of that to the crude chat logs that prompted former Gov. Ricardo Rosselló to resign, and you have a recipe for some very angry residents.

After she was sworn in, Vázquez acknowledged the massive challenge ahead of her. But she vowed to serve the people and give the island stability.