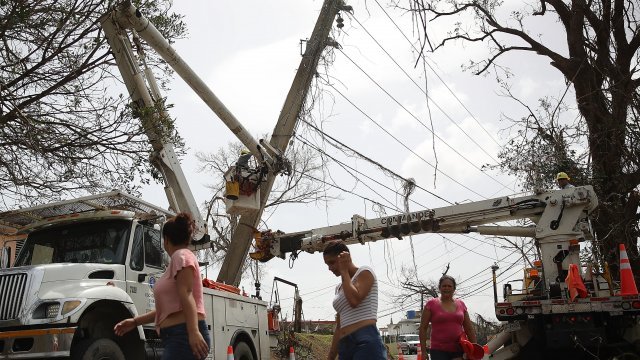 SMS
Puerto Rico Says New Electric Grid Will Be Easier To Fix, Maintain
By Gabrielle Ware
By Gabrielle Ware
May 7, 2018
The Senate Committee on Energy and Natural Resources plans to discuss the state of the grid Tuesday.
SHOW TRANSCRIPT

The Senate Committee on Energy and Natural Resources will examine Puerto Rico's electric grid system Tuesday. It comes as the island plans to adopt standards widely used in the rest of the U.S. when rebuilding its storm-ravaged grid.

The CEO of the Puerto Rico Electric Power Authority said the switch will make the system easier to maintain and repair.

Hurricane Maria knocked out power for the entire island in September.

Efforts to restore it have been slow and filled with complications. An arguably lax response by the U.S. government and the hiring of a very small energy company to handle the massive task of restoration helped to create what one research firm is calling the longest and largest blackout in U.S. history.

As of this weekend, 95 percent of the power grid had been restored, leaving about 29,000 PREPA customers without power. But the island still has reliability issues that a new standard could help with.

Just last month, the whole island lost power again due to a power line defect, according to officials. It was the second major blackout in less than a week.