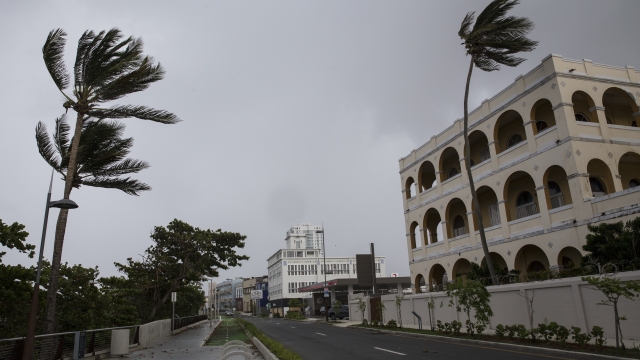 Puerto Rico is preparing for the worst as Tropical Storm Dorian continues to gain strength.

The island is under a tropical storm warning and a hurricane watch. The National Oceanic and Atmospheric Administration says Dorian could strengthen to a Category 1 hurricane as it moves closer to Puerto Rico.

The U.S. territory is still reeling from the damage done by Hurricane Maria two years ago. Maria smashed into the island as a Category 4 storm, killing thousands of people, causing widespread damage and knocking out the entire power grid. It took almost 11 months to restore power across Puerto Rico, and the island faced roadblocks in receiving disaster aid.

But the recently sworn in Puerto Rico Gov. Wanda Vázquez says her island is more prepared this time around. She's issued a state of emergency and signed an executive order to freeze fuel prices.

Some 360 shelters will open for residents whose roofs haven't been repaired after Hurricane Maria. About 30,000 homes are still using blue tarps to keep dry. The shelters will hold 48,500 people.

People lined up at a wholesale store to stock up on water and supplies. One food industry group says businesses are better prepared now than they were for Hurricane Maria, with up to 30 days of supplies stocked.

Dorian is expected to pass near Puerto Rico Wednesday afternoon with strong winds and up to 6 inches of rain on some parts of the island.