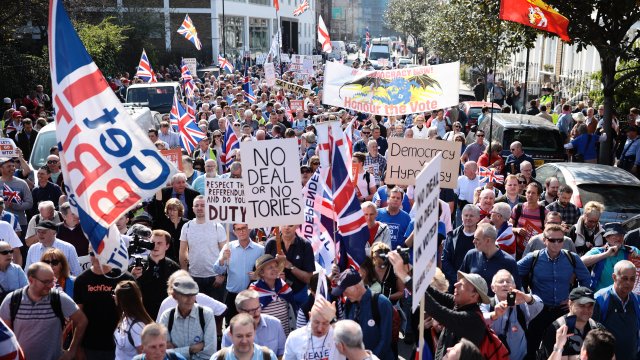 With a politically vulnerable government and a small shift in public sentiment, changes to the Brexit landscape could be on the way.

U.K. politicians have relished in the Brexit discussion with comments like this:

"The offer of the election today is a bit like the offer of an apple to Snow White from the wicked queen, because what he's offering is no offer of an election but the poison of a no deal," Labour Party Leader Jeremy Corbyn said Wednesday.

The public? They haven't had much of a say after waiting more than three years, and not much to show for it.

"I mean since Brexit, we've been through three prime ministers, various Brexit ministers, no one knows what we're doing. We certainly need a change," said Will Carter, a record shop employee from Wakefield, England.

"Perhaps people are more knowledgeable about what would happen if Brexit actually did happen," said Abby Hood, a student in the U.K.

People living in the U.K. could get a chance to influence where Brexit goes from here. Their first opportunity comes with another early election that looms over the next few months. That election will decide which parties will govern Parliament.

"There are very few things I feel comfortable predicting on Brexit," said Amanda Sloat from The Brookings Institution. "But the odds of an election are absolute."

A snap election, if it were to happen before the Oct. 31 Brexit deadline, would give Prime Minister Boris Johnson a chance to win back a majority of seats in Parliament. If he wins, there's an increased chance the U.K. will leave the EU without a withdrawal agreement. However ...

"If you get an opposition government either led by Labour or some coalition of opposition parties, it is possible you could get a second referendum on this," notes Sloat.

A second referendum would give the public a chance to tell Parliament where to go from there. But, as with most things involving Brexit, it may not be straightforward. It's unclear if voters will be given a chance to decide whether to remain in the EU or stay. The public could, in theory, only be asked if it prefers to leave the EU with an agreement or without one.

"Obviously 'leave' would be an option," said Sloat. "There have been discussions in the past about whether the deal negotiated by Theresa May was put on the ballot as a possibility. Even if you get parliamentary support for a second referendum. You would get a lot of wrangling over what the questions would be."

She continued: "Keep in mind, 51 percent of the public voted to leave in 2016. However, a number of polls this year show — by a very slim margin — more people are in favor of remaining the EU, further complicating the UK's departure."

"I think the thing to remember is that there was a referendum and 17.4 million people voted to leave the European Union," Sloat said. "So the Conservative government has been doing its best to implement the results of the referendum. The problem that we are seeing is divorce is very complicated, and trying to break up a union over 40 years has proven to be very difficult."

A snap election, and a possible second referendum, may be another chapter in the Brexit story. But with so much left to be sorted out, the saga is far from over.