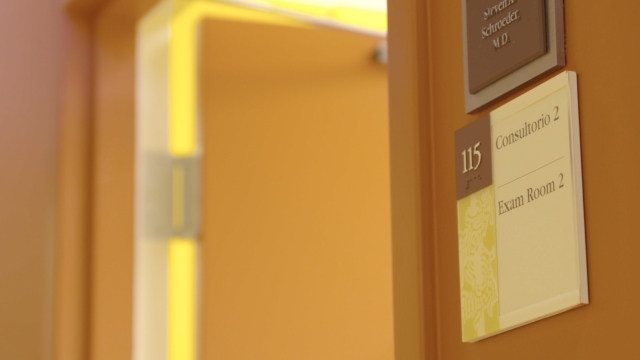 SMS
Immigrants Fear Having Health Insurance Could Hurt Legal Status
By Kellan Howell
By Kellan Howell
May 9, 2019
A Trump administration proposal may be prompting immigrants to forgo health insurance out of fear it would hurt their legal status.
SHOW TRANSCRIPT

She oversees 140 employees and volunteers at the clinic, which serves thousands of patients each year, mostly from Central America.

It's a demanding job that she says has gotten harder in recent months. While the clinic is serving more patients than ever, the number who have health insurance has dipped.

"The stress level in our patient population is high. It’s also high in our workforce," Sol said. "It’s hard to be working in a community health immigrant center now. People wonder, we’re the target. How long are we gonna be here?"

Sol's clinic is not alone. Immigration and patient advocates around the country say a growing number of non-citizens are choosing to forgo health insurance out of fear it could lead to deportation -- thanks to a proposal from President Donald Trump to expand a policy known as public charge.

It's an idea that's been ingrained in U.S. immigration policy for over 100 years -- immigrants seeking to come to the U.S. or seeking citizenship who are deemed unable to support themselves financially are considered a "public charge" and denied a visa or green card.

To determine who is a "public charge," officials will look at things like an applicant's health, finances and which public benefits they are using or are likely to use.

The factors that the U.S. government looks at when determining who is a public charge have changed over the years and the current definition is very narrow.

But now, the Trump administration wants to broadly expand the list of public programs that could become a mark against immigrants applying for a visa or green card, including health care programs like Medicaid.

Rina Gandhi, an immigration lawyer based in Washington, D.C says many of her office's clients were panicked by early reports of the proposal.

"We were just drowning in phone calls of people scared you know. 'Is my husband going to be deported because my son is taking Medicaid or my child has Down syndrome and we accept state benefits, but my husband's undocumented. Is that going to affect our case going forward?'" Gandhi said.

The Department of Homeland Security made the proposal public in October of 2018. Experts warn that the proposal has already sparked a chilling effect that is leading many immigrants to avoid all public benefits, even health insurance. Early signs back up those fears.

New enrollment for healthcare through Covered California, the state's public insurance marketplace, dropped by 23.8 percent in 2019. Officials said consumers who did not speak English as their first language experienced a larger overall decline in enrollment than those who did speak English primarily.

In another survey, 40 percent of uninsured people in California responded that they were” very worried” or “somewhat worried” that signing up for health insurance would draw attention to their immigration status.

In fact, experts say public charge may have helped fuel a notable nationwide drop in new sign-ups for Obamacare through healthcare.gov, which fell more than 15 points this year.

"There’s just a lot of fear and concern so people just kind of stay away from any public program for fear that it could at some point affect their immigration status," said Erin Hemlin, director of consumer education for Young Invincibles, a non-profit aimed at getting young people's voices into policy discussions around issues like health care and student debt.

U.S. Citizenship and Immigration Services Director Francis Cissna defended the proposal in a statement to Newsy saying, "Since the 1800s, federal laws have required foreign nationals to be able to care for themselves without being a public charge. As such, it is incumbent upon the U.S. government to evaluate applications in a manner consistent with federal law, and I believe the public charge regulation is a necessary step to achieving that goal."

DHS estimates that the hundreds of thousands of people who disenroll from public benefits because of the new proposal could save the government about $1.5 billion per year.

But that number pales in comparison to what hospitals say they pay for treating uninsured patients. Uncompensated care costs hit $38.4 billion in 2017. And with an estimated 22 million noncitizens, living in the US, health care providers worry the cost could climb even more because of the rule. That could drive up costs for all patients.

Sol says the clinic is already feeling the financial impacts of the proposal.

"The fewer people that have insurance, the less income that you have to be able to provide services… So we're absorbing the repercussions of this. The burden of people who are sicker grows in a community," she said.