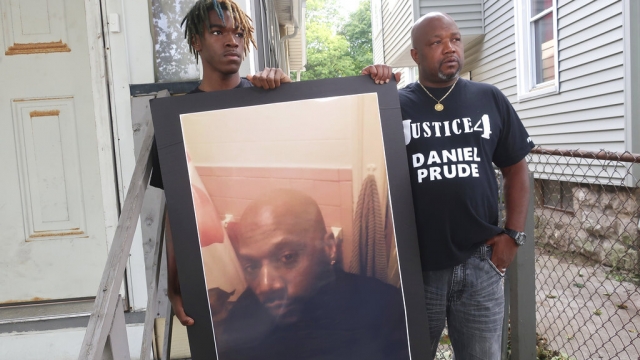 Newly released video from the family of Daniel Prude shows the arrest they say led to his death in March.

We want to warn you that the footage is graphic.

The video shot by body cameras worn by Rochester police was just released by Prude’s family attorney… after a lengthy legal fight to get it from the city. In it, you see a naked Prude placed in handcuffs by police, later as Prude grows increasingly unsettled, officers placed a so-called spit hood over his head, held his face to the pavement and knelt on his back.

They later realize he’s vomited and isn’t moving. He died seven days later after being removed from life support.

According to the county medical examiner, Prude's death was ruled a homicide, caused by asphyxiation with the drug PCP as a contributing factor.

“How many more brothers got to die for society to understand that this needs to stop?” said Joe Prude, Daniel Prude’s Brother.

Prude had a history of mental illness and hallucinations and had been in the hospital for suicidal thoughts a day before.

On the day of the incident, Joe Prude, Daniel Prude’s brother, called police after Prude left his house erratic.

“We've allowed mental health to become a criminal justice issue. But what we should do is what we do for any other illness when somebody's sick, a medical professional should respond,” said John Snook, CEO of Treatment Advocacy Center.

According to research from the national non-profit Treatment Advocacy Center, 1 out of 10 calls to police are for individuals with severe mental illness; something many officers aren’t equipped to handle

“The reality is lots of people with mental illness have what we call co occurring disorders, that they treat their mental illness with drugs. And so, in a medical world, what you say is, oh, I don't care why they're sick right now. I just know they're sick and they need help. The reality is we need to get to a medical system that an officer can say, this person's in need of help and I'm going to take them to a medical facility. Lots of states have moved in that direction. But we aren't there yet as a country,” said Snook.