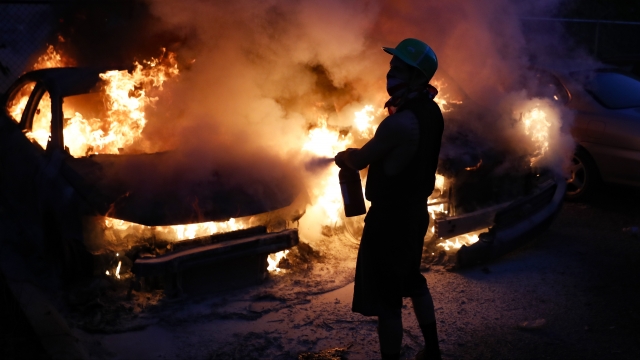 SMS
Protests Rage Across America Over George Floyd's Arrest, Death
By LeeAnne Lowry
By LeeAnne Lowry
May 30, 2020
Minnesota's governor called for an end to destructive protests, noting that the city is also trying to contain the coronavirus pandemic.
SHOW TRANSCRIPT

Protests spread across America Friday night as outrage grew over the killing of George Floyd during his arrest by Minneapolis police.

Floyd, a Black man, died Monday as a White Minneapolis police officer pressed a knee into his neck. After several nights of protests, the former officer was charged with murder and manslaughter.

Minnesota Gov. Tim Walz said in a news briefing Saturday he's authorizing "full mobilization" of the state's national guard after violent protests Friday night, despite a Minneapolis curfew. He called for an end to violence, noting that the city is also trying to contain the coronavirus pandemic. Walz said the protests are "no longer in any way about the murder of George Floyd" or "historical trauma to communities of color."

He said, "The disenfranchisement that went with what we witnessed with George's death is one thing, but the absolute chaos, this is not grieving."

Demonstrations sprung up in at least 30 other cities across the country. In Los Angeles, demonstrators shut down a major freeway. In Portland, Oregon rioters broke into the county justice center and started fires in cubicles. And in Detroit, one protester died. Police say shots were fired from a vehicle into a crowd.

And hundreds of demonstrators massed near the White House. After hours of escalating protest, police declared the gathering unlawful. They drove the crowd out with pepper spray.

President Donald Trump criticized Washington D.C.'s mayor Saturday morning for not allowing police to get involved, despite the fact that D.C. police were on the scene.

The president also thanked the Secret Service, calling them "totally professional" and "very cool." He said if protesters had breached the fence they would have been met with "vicious dogs" and the "most ominous weapons." That came after an earlier inflammatory Tweet depicting the shooting of looters.

Meanwhile in Atlanta, Mayor Keisha Lance Bottoms criticized protesters who resorted to violence by throwing explosives at police outside the CNN center and looting the College Football Hall of Fame. She said they were compounding the tragedy of Floyd's death. The mayor said: "This is not how we change America. This is not how we change the world."