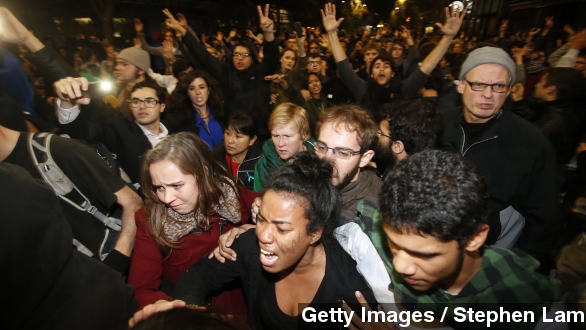 The protests began with a rally on the University of California, Berkeley campus calling for accountability for excessive police force, pointing in particular to the deaths of Michael Brown and Eric Garner. (Video via KNTV)

From there about 400 protesters filled the streets, eventually ending up at the Berkeley Police headquarters.  (Video via MSNBC)

And that's when the protests – intended by organizers to be peaceful – took a turn.

"The next thing you know that window breaks, that window starts breaking, these two windows break." "A guy with a crowbar comes in starts stealing stuff."

And police say they were forced to use smoke and tear gas to disperse the crowd, though many people, including the peaceful protesters and the large number of concertgoers who found themselves in the area, say it was an unnecessary measure.  (Video via KTVU)

The Berkeley protest is one of many that have been held around the country since grand juries elected not to indict police officers who killed unarmed black men. Protests have spread as far as New York, Miami, Washington D.C. and St. Louis. (Video via The Wall Street Journal)

And it was the third straight night of protests in the Bay Area. On Friday, Protesters in Oakland targeted a tree lighting event and even briefly shut down traffic on Interstate 880. (Video via KPIX)

At least six people were arrested Saturday night in Berkeley and two Berkeley police officers were injured in the skirmishes.