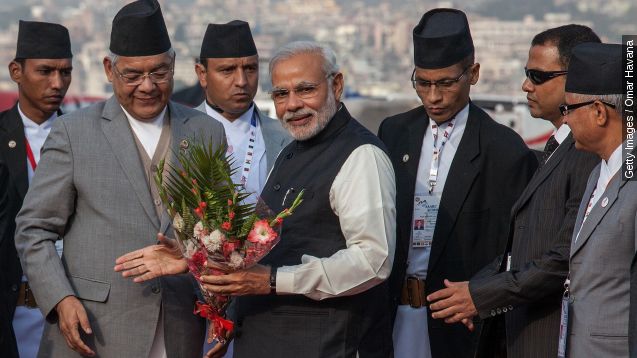 Nepal enacted its first republican constitution Sunday, and the news was greeted with violence, demonstrations and disapproval from the country's biggest neighbor.

Many ethnic groups in Nepal are protesting how the new constitution divides up the country, claiming it will dilute their representation in the new parliament.

Demonstrations have turned violent in the southern region of Nepal, causing at least 40 deaths over the past few weeks.

And that's making India very concerned — not only because the violence threatens to spill over the open border between the two nations, but because India is very invested in what Nepal's government ends up looking like.

India has a history of intervention in Nepal — in positive ways such as helping the Himalayan nation recover after it was hit by a magnitude-7.8 earthquake in April, and in less welcoming ways that often involve behind-the-scenes political maneuvering.

And the creation of a Nepalese Constitution is important to both countries. Born out of a bloody Maoist revolution, the constitution is supposed to mark Nepal's transition to a peaceful republic. Its success or failure could have big implications for regional stability.

India's foreign secretary landed in Kathmandu on Friday to discuss the situation. He said the new constitution should be "an occasion for joy and satisfaction, not agitation and violence," and called on Nepalese politicians to "display the necessary flexibility and maturity."