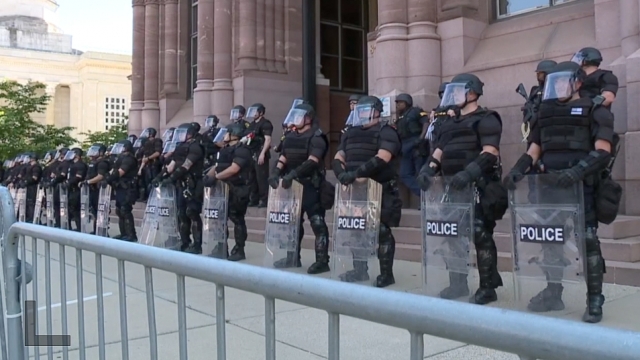 "Until you walk in my shoes and understand what that means by being in this profession and being a law enforcement officer, then could you really, really understand my role," Richmond, Virginia, police officer Carol Adams said.

Mental health experts say the stigma attached to policing can add to the psychological drain that goes along with working the front lines of racial injustice protests.

"There is a mentality that we are tough. We don't break. We don't need help. We just need to shoulder through. And that's not true," Dr. Eric French said.

Dr. Eric French tells Newsy that the fluid nature of protests can lead to anxiety and stress on those controlling them in the short term. And continued demonstrations can lead to an overload of adrenaline.

"Everyone absorbs things emotionally, and it impacts our ability to think clearly, to sleep well, to feel well throughout our day," he said.

"What becomes tough is when they have to decide between their employment and alliance to their racial identity," Hargons, the director of the Center for Healing Racial Trauma and assistant professor at University of Kentucky, said.

“I’ve seen one post that says Black men in law enforcement are the weakest men in the world. Just because I put on this uniform doesn’t mean we forget about our families or forget about our culture,” Utah Highway Patrol Trooper Ivan Lofton said.

"You're having to sort through the discomfort that you feel in having to hold both of them, so a lot of people double down on one. And for people who are being paid to double down on one, they might sometimes lean toward the thing that's going to get them a pension. It's very difficult to say, 'Here is how you should do it' without understanding the psychology behind it and giving people the language to say, as a Black police officer, this is what you might feel. And this is the type of stress it could cause if you have to show up at a protest and defend against something that you don't actually believe in," Hargons said.

Individually, experts say law enforcement officers can use self-care tools like therapy, peer counseling, meditation or journaling. But because of the vast differences from department to department and state to state, anything on a universal scale would be unlikely.