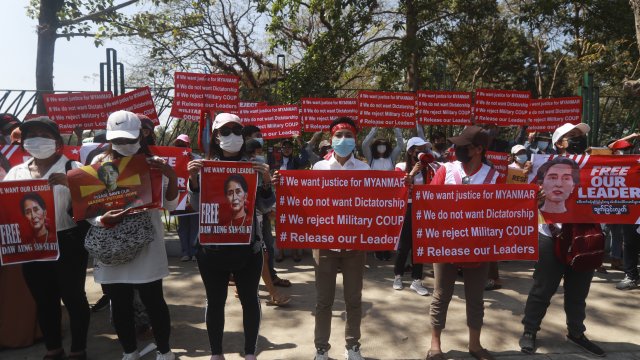 Tens of thousands of protesters took to the streets Sunday in Myanmar — the ninth straight day of demonstrations there despite a military crackdown and heightened arrests.

More than 380 people have been arrested since the coup, with most being held without charge. And that number is likely to go up — on Sunday leaders suspended laws that require court orders for search warrants and to keep people in jail longer than 24 hours.

Protesters in Yangon applauded Washington's response to the events, rallying outside the U.S. embassy after it tweeted, "The civil disobedience movement and demonstrations show that the people of Myanmar want democracy. We stand with them."

President Biden has called for a return to democracy in the Southeast Asian country, freezing $1 billion in Myanmar government assets in the U.S.

"As protests grow, violence against those asserting their democratic rights is unacceptable, and we're going to keep calling it out, the people of Burma are making their voices heard and the world is watching.