Hong Kong's Extradition Protests Are All About Chinese Influence 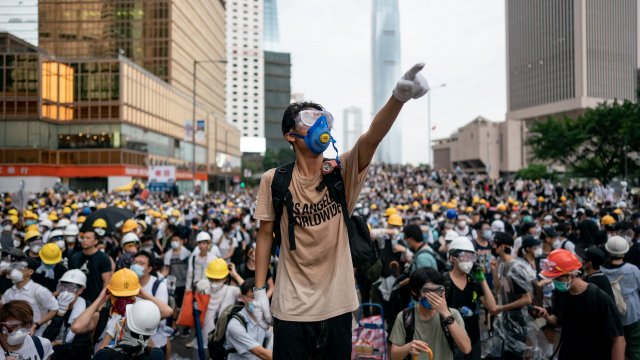 Protesters in Hong Kong are marching against changes that they fear would give China too much influence in the city's legal system.

The chaotic demonstrations in Hong Kong are largely fueled by fears that a new extradition law could give mainland China more influence over the city.

Hong Kong's central government wants to let Chinese authorities request that people in Hong Kong accused of certain crimes be sent to mainland China for trial. Protesters worry Beijing will use that ability to crack down on dissidents in the city.

Even though Hong Kong is a Chinese city, it maintains a semi-independent government that guarantees its citizens different rights and legal protections than the rest of China.

But a murder case in Taiwan that ended up in Hong Kong's court system kicked off a push for new extradition rules. The city's chief executive, Carrie Lam, insists she's trying to close a legal loophole that allows Chinese criminals to take refuge in Hong Kong.

For pro-democracy activists, this law is another example of China's efforts to control Hong Kong. Demonstrators also flooded the streets in 2014 after China tried to exert more influence over how the city chooses its leaders.

Legal differences aren't the only divide between Hong Kong and the rest of China: The two regions diverge on everything from free speech rights to economic systems. Hong Kong's autonomy is supposed to persist until 2047 at least, but China has signaled it might not be willing to wait that long.