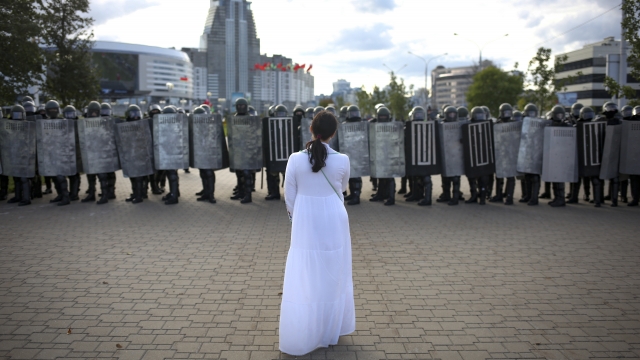 SMS
Protests In Belarus Enter 6th Week With No Signs Of Letting Up
By LeeAnne Lowry
By LeeAnne Lowry
September 13, 2020
Sunday's protest came ahead of a controversial meeting between Belarus and ally Russia.
SHOW TRANSCRIPT

Daily protests in Belarus have entered their sixth week, and protesters are showing no signs of backing down on their demand that President Alexander Lukashenko resign.

Protesters say the country's August presidential election was rigged. Lukashenko has served as leader of the eastern European nation for the last 26 years.

Over 100,000 people turned out on Sunday — a size that has become typical of the country's marches. Police — both in uniform and plain clothes — violently detained 250 demonstrators. Reuters reports that protesters were pulled from the crowd and beaten.

Often called "Europe's Last Dictator," Lukashenko regularly represses those who speak against him. The 66-year-old strongman has even warned protesters that there would be no new elections QUOTE "until you kill me."

Russia and Belarus have a close alliance, though Lukashenko has said he's worried Russia wants to absorb Belarus.

How much violence is he willing to use to keep control?

How much staying power do the protesters have?

And can Lukashenko depend on help from Moscow?

The leaders are having their first face-to-face meeting on Monday since the unrest started.