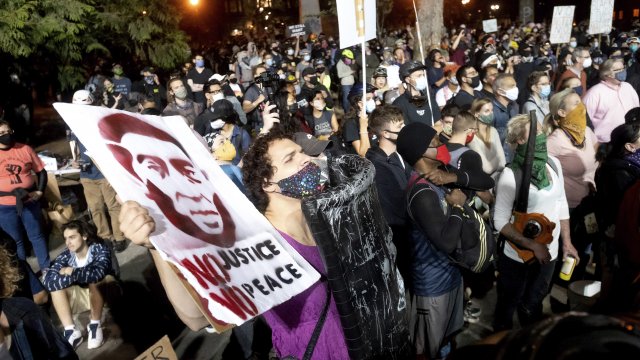 Protests in Portland continued peacefully for the second night Friday after federal troops left the city.

Under a deal between Oregon's governor and the Trump administration, federal agencies on Thursday withdrew agents who had been dispatched to the city. Soon after, a vigil the next morning saw virtually no sign of Oregon state police officers who have now taken over protection of federal buildings.

This is a big change from recent weeks, which saw clashes between police and protesters nightly. The intensity picked up after President Trump sent federal law enforcement officers to the city in early July. Confrontations outside the U.S. courthouse resulted in tear gas, rubber bullets and arrests.

The president justified the federal crackdown saying local authorities had, "lost control of the anarchists and agitators."

The Washington Post reported the Department of Homeland Security is still keeping more than 130 agents near the courthouse as a reaction force to quell potential violence. But their former aggressive presence was nowhere to be seen Friday. There were no arrests or tear gas.

Portland protests have been ongoing since George Floyd's death. After federal troops arrived, they were seen on video firing projectiles and pepper spray at demonstrators and, without explanation, grabbing a protester off the street and shoving him into an unmarked van.