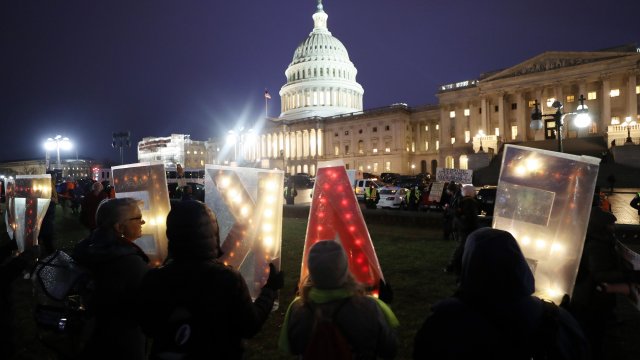 Protesters erupted nationwide after the Senate voted to acquit President Trump on charges of abuse of power and obstruction of Congress.

Protests erupted nationwide after the Senate voted to acquit President Trump on charges of abuse of power and obstruction of Congress.

Demonstrators argued that President Trump should be removed from office and that Senate Republicans failed to conduct a fair trial by rejecting calls from Democrats for additional witnesses and documents.

Common cause, public citizen, Women's March and a host of progressive organizations came together under the rallying cry "Reject the Cover Up."

Several Democratic lawmakers joined the packed crowd of organizers, demonstrators and activists outside the Capitol Building.

This is an international corrupt criminal enterprise and the president should be held accountable.

We have known exactly who Donald J. Trump is for a long, long time. He has been consistent, driven by ego and profit, void of humanity and compassion.

President Trump, on the other hand, had a much different reaction to the vote.