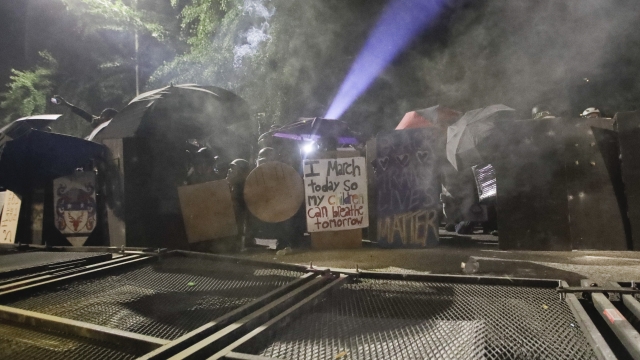 Two months after the death of George Floyd in Minneapolis police custody, protests continued across the United States this weekend, some with injuries.

Tensions continued in Portland days after President Trump said he was sending federal agents to restore order in the city.

On Sunday morning, demonstrators toppled a fence surrounding a federal courthouse — throwing projectiles and fireworks. The protesters were met with rubber bullets and tear gas from the federal agents and the protest was eventually labeled a riot. More clashes came Sunday night, the 60th consecutive night of protests in Portland.

In Louisville, heavily armed demonstrators marched through downtown to protest the death of Breonna Taylor — shot and killed while police served a no-knock warrant at the wrong address.

In Oakland, a protest escalated on Saturday night after "a small group of demonstrators" set fire to a courthouse and smashed the windows of a police station. According to the Associated Press, authorities said they have made arrests but wouldn't provide additional details.

In Aurora, Colorado, a protester fired a weapon at a vehicle moving through demonstrators on a highway and shot two fellow protesters. Authorities said the injured are in stable condition.

And in Austin, Texas, protester Garrett Foster was shot and killed by a motorist in a confrontation with demonstrators. The motorist claimed Foster pointed a weapon at him. Police wouldn't release the shooter's name but said he's been released as the investigation continues.

Appearing on ABC on Sunday, White House chief of staff Mark Meadows defended the use of federal agents to try to quell the chaos, saying, “We can’t have this in American cities.”