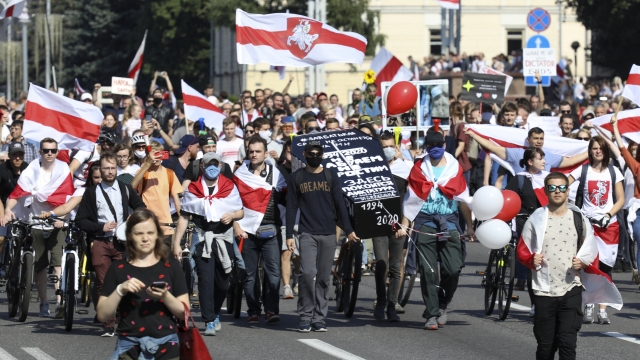 Protests in Belarus continued over the weekend as demonstrators demand the resignation of President Alexander Lukashenko.

On Sunday, which was also Lukashenko's birthday, tens of thousands of protesters marched through the city of Minsk to the presidential palace, despite warnings of heightened police presence and force.

On Saturday , Lukeshenko — often called the "Europe's last dictator" — also cracked down on news media covering the protests by revoking credentials from some Belarusian journalists and deporting some Russian journalists.

Lukeshenko, however, seems to have support from Russia. Despite a previously rocky alliance, President Vladimir Putin confirmed the country has reserved a police force to intervene in Belarus if necessary. After a call Sunday, the two leaders will reportedly meet in Moscow soon.

Protests began after the August 9 presidential election in which officials say Lukashenko won in an 80% landslide over his main challenger, Sviatlana Tsikhanouskaya – giving him a sixth term. Lukashenko has even warned protesters that there would be no new elections "until you kill me."