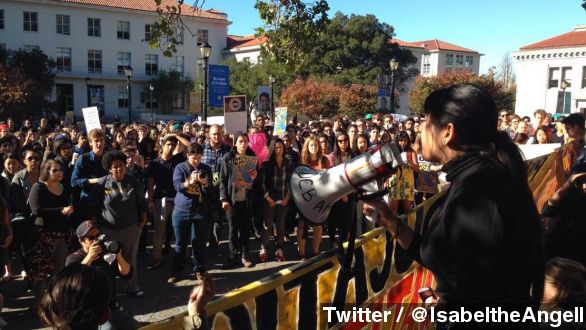 The University of California campuses have had a tumultuous week and it shows no signs of slowing up.

One student told KRON, “We are building a movement to defend public education, stop privatization and fight the resegregation of this university so that it looks like the state of California.”

UC Berkeley students and alumni occupied Wheeler Hall the night before the US Board of Regents voted on future tuition hikes across the UC system of schools. (Video via KNBC)

Then Thursday – with a 14 - 7 vote – the UC Board of Regents approved a 5% tuition hike per year for the next five years. Since the vote the campus has experienced even more turmoil.

Another student said, “We only control our campus and that’s what we did. We had no other choice but to stop this bonfire.”

With protests erupting Friday during what was supposed to be a pep-rally and campus bonfire.

And they continued Monday with students at UC Berkeley walking out of their classes at noon and marching through the city.

The protests have gotten lots of attention throughout the past week but could lose steam due to the Thanksgiving holiday.

One of the protesters told the Los Angeles Times, “Thanksgiving does not mean our movement is over, but we don’t know exactly what we’re going to do yet.”

But there is the possibility the cost of tuition could remain the same — if the state of California provides more funding to the UC system. If not it could rise by more than 28% between now and 2019.