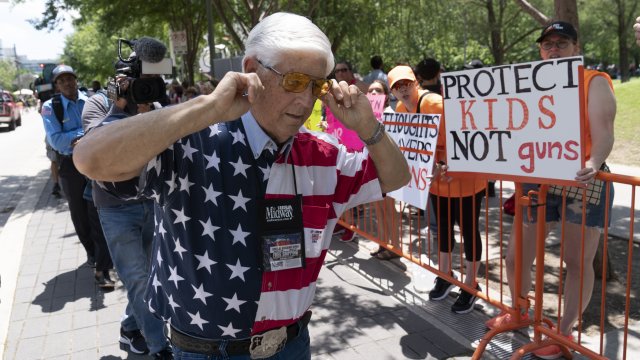 SMS
Protests Continue At The NRA's Annual Meeting
By John Mone
By John Mone
May 28, 2022
Protesters gathered outside, demanding at least something be done to address the cancer of mass shootings.

The National Rifle Association boasts of 14 acres worth of metal smithed merchandise in Houston. It’s expected that tens of thousands of people will visit its annual convention.

The NRA says its members should reflect on the Uvalde massacre, but it — and many of its members — say firearms themselves aren't the problem.

"We have a culture of violence promoted by Hollywood and other types that are making money off of it," said NRA member Don Wright. "And we're blaming the tool."

"That gun doesn't jump up and kill somebody," said NRA member Bo Peevey. "It's how people were raised and what they [were] raised around."

But not every member was as absolute.

"They are teenagers who are buying guns, which I sometimes see that maybe that's not a good idea," said NRA member Mohammed Janjua. "But then it comes to a point where like there is a Constitution, right? But I think there has to be some kind of balance."

"I don't agree with that, that you should be able to just — anybody can just go get one," said NRA member Renee McNeely. "I do believe that you should have — I had a background check when I got mine, too, you know, and I don't have a problem with it."

Outside, protesters gathered once again, demanding at least something be done to address the cancer of mass shootings. Two of them told us they used to be NRA members.

"The NRA used to be more about gun safety in gun training programs," said former NRA member Delia Justice. "And then I watched them become more of a domestic terrorist cult."

The gathering was loud and full of invective, but peaceful. Yet that was threatened by a cell of Proud Boys, a well documented fascist street fighting club. Police eventually dispersed them.