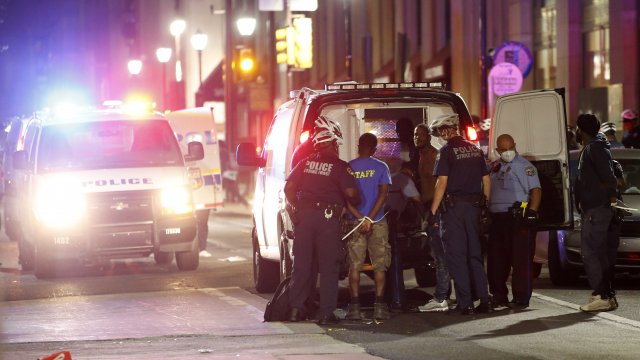 Minneapolis, L.A., Atlanta and more than 20 other cities had overnight curfews over the weekend with police enforcing the orders.

Overnight curfews have been enacted in more than a dozen U.S. cities across the country as civil unrest continues over the death of George Floyd and other Black people who've died while in police custody.

Protesters across the country are calling for justice and demanding that all four Minneapolis police officers involved in Floyd's arrest be held accountable for his death. One White officer was charged with third-degree murder after kneeling on Floyd's neck, keeping it there even after Floyd became unresponsive.

Although there have been peaceful protests, some where law enforcement themselves stand with protesters against police brutality, many demonstrations have turned violent. Burnt buildings, broken windows and looted stores have stretched across the country as local authorities try to maintain control.

Minneapolis, Los Angeles, Atlanta and more than 20 other cities set overnight curfews over the weekend. Police, in some cases, used tear gas and rubber bullets in clashes with protesters. The National Guard has been deployed in some states such as Georgia, Kentucky, Ohio and Texas.

The Associated Press has counted at least 1,700 arrests across the country since Thursday, a third of them in Los Angeles. In Philadelphia, Chicago, and New York City, more than two dozen police officers were injured. Meanwhile, in South Carolina, protesters defaced a confederate statue and in North Carolina, a monument at the state capitol was marked with a black X and the word "racist."

On Sunday, the mayor of Atlanta called for calm. Appearing on NBC's "Meet The Press," Mayor Keisha Lance Bottoms said there is a "systematic problem" with race relations in America "that will take time to address" but that, quote, "The solution is not to destroy our cities.”

Additional Reporting by Tim Sullivan and Stephen Groves of The Associated Press.