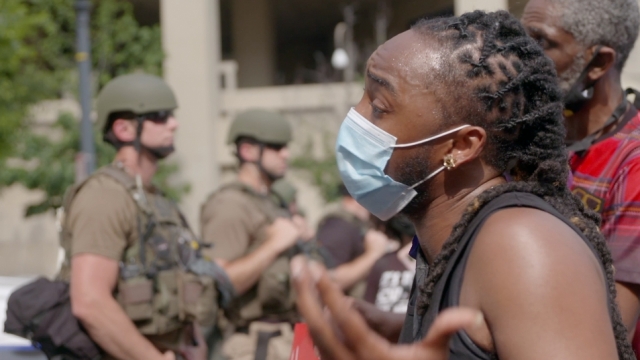 As the chants and rally cries echo across the world, psychologists are warning that the mental drain on the individuals protesting racial injustice can last long after the demonstration is over.

"It adds to the reality that many African-Americans experience in terms of their blackness and how they're often perceived as being targets," psychologist Dr. Erlanger Turner told Newsy.

He adds that it doesn’t matter if you’re at the protests or watching them unfold online.

"Even a peaceful rally might be psychologically draining, taking a psychological toll on the body when it gets to things that may sort of escalate, incidents where police are pointing guns at individuals. And if there is shooting there with pellets or whatever, then that leads of individuals to potentially be at a much higher risk of trauma reaction symptoms such as PTSD," he said.

"It's hurting us as people, it's hurting," one protester at a Washington DC demonstration said.

Protesting can cause a person to have a strong emotional reaction that builds up in the body, leading to symptoms like difficulty sleeping.

"One thing that we know from research is that when you are triggered by these types of images -- and not just with police shootings, but any type of traumatic event -- you begin to have  increases in blood pressure and heart rate, all those breathing difficulties. And so you may notice those sort of physiological changes in your body when you watch those videos. And then what happens if you don't know what to do with that?" Turner says.

"I know it's emotional. I'm emotional every day because it's what I do," another D.C. protester told a recent protest crowd.

There’s also something called social and racial battle fatigue. Those impacts can include exhaustion, depression or anxious feelings.

"People who are engaged in protests or activism movements and constantly on the front lines, constantly engaged, feel just worn out physically, emotionally, spiritually after a while because the work doesn't end. So there's always something to do," said psychologist Dr. Candice Nicole Hargons, Director of the Center for Healing Racial Trauma and Assistant Professor at University of Kentucky.

Experts say that for protesters, managing their mental health can come in the form of self care, soul care, or collective care. Things like taking a break for a day, meditation, therapy, or journaling. They recommend avoiding activities that can lead to numbing any anger or pain instead of processing it.

"You don't want to do too much nothing. And that's anything that has been associated with binge drinking, binge Netflix or shopping, all of the bingeing things are numbing. You're basically trying not to feel something where a self care is enriching your physical or mental space," Hargons said. "So perhaps you're at a protest and that feels like a soul care, collective care to you because you're doing something about the racism that you're experiencing. So all of those are different levels of how you take good care of yourself and sustain yourself."