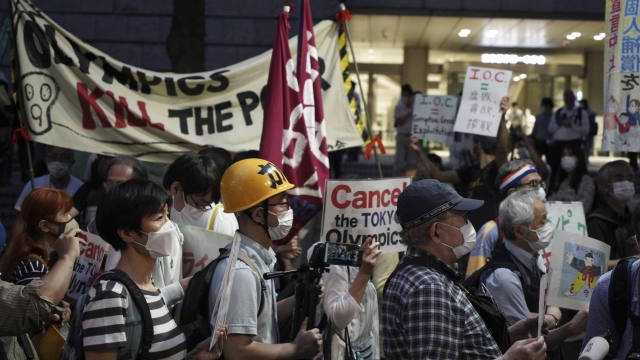 The summer Olympics are one month away, but the road to clinching gold has been anything but smooth.

Hundreds of protesters in Tokyo say they want to see the games canceled over concerns of spreading COVID-19.

But people like Hanawa, a 70-year-old protester, question the move,  saying “cases were around 200 during the first state of emergency. Now there are 400 to 500 cases. Why is Japan lifting it?”

As of Wednesday, about 7% of people in Japan are fully vaccinated, and more than 14,000 people have died from COVID-19. It’s good by global standards, but worse than many Asian neighbors.

But with billions of dollars on the line, the International Olympic Committee has said the games will go on.

The Tokyo 2020 organizing committee saying  ‘it has no choice’ but to hold a re-lottery for games tickets.

The committee decided only 10,000 spectators could attend the games, forcing fans who already had tickets to give them up.

Those who wind up with a ticket, “will have to wear a mask. They'll have to social distance. They'll be asked not to cheer, and they're being asked to leave immediately afterwards, not go to bars, not go to cafes, to go home.”