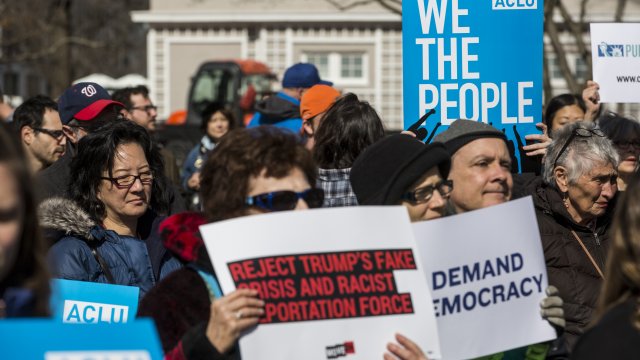 Hundreds of people turned out in front of the White House on President's Day to protest President Donald Trump's declaration of a national emergency.

It's part of a national day of action directed against the president. MoveOn.org estimates over 30,000 people in 48 states turned out to demonstrate.

Reggie Hubbard, the Congressional Liaison and D.C. Strategist for MoveOn.org, told Newsy: "The Crisis Response Network springs into action to get grassroots folks to come out and, you know, petition the government for its grievances. Like, this is not cool. ... He's kind of grabbing at whatever he can to appease his base and we're just like you can grab what you can but this is illegal."

The emergency declaration allows Trump to redirect funding towards a wall on the southern border without getting congressional approval. President Trump has described drug trafficking across the border and illegal immigration as a crisis that merits taking emergency actions.But both the emergency and the wall has been denounced by activists on the left as a political stunt to fan racial tensions.

16 states have joined together to file a lawsuit in California against the national emergency declaration. But demonstrators made it clear they want to see Congress take action to restrain the White House as well.

One protester told Newsy: "It matters that we have a president in office who's doing his best to only serve himself to dismantle our democracy, and dismantle many of the rights that many of us have fought so hard for for so many years."

Hubbard said: "If the grassroots can spring together in two days to bring 30,000 people at 250 events across the nation imagine what we can do at the ballot box. We think every politician should be aware of that, Democrat or Republican, but especially the president."