Protesters Call For Czech Republic's Prime Minister To Step Down 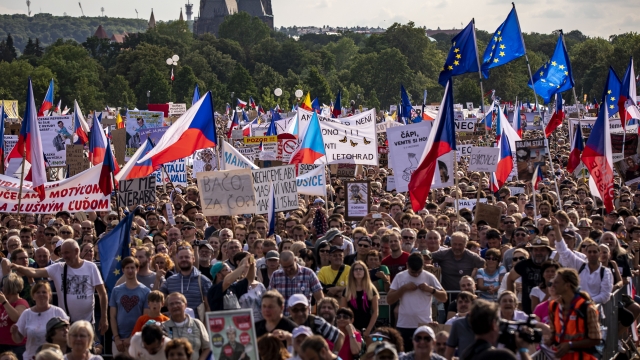 Hundreds of thousands of people protested in the streets of Prague over the weekend, pushing for the Czech Republic's prime minister to step down.

It's being called Prague's largest anti-government protest since the fall of the country's communist regime in 1989. But this time around, protesters say they want to support the political system, not overthrow it.

Prime Minister Andrej Babiš faces conflict of interest allegations and a criminal investigation over alleged fraud involving European Union funds. In 1993, the now-billionaire started a conglomerate that runs several industries, including agriculture and media. The group's website says it's one of the largest private employers in the Czech Republic. In 2017, when Babiš became prime minister, he had to transfer ownership of the company to trust funds. But a leaked preliminary EU report says Babiš may still be benefiting from the group. And, at one point, law enforcement says Babiš hid the fact that he owned a farm so it could qualify for European subsidies meant for small businesses. The EU report says the prime minister should return some $20 million in subsidies.

The newly appointed Czech justice minister is a close ally of Babiš and has voted against a law enforcement request to strip his parliamentary immunity so he can be investigated.

Peaceful protests have called for both the justice minister and Babiš to resign, saying they threaten the country's democracy. Babiš has dismissed all of the allegations and refused to step down.