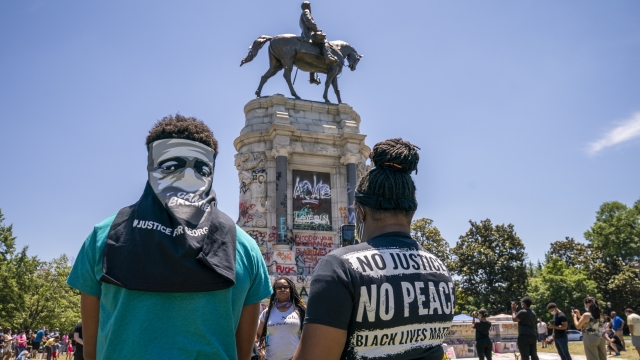 Since the death of George Floyd, protests have erupted nationwide and even around the world. Now, after weeks of demonstrations, protesters in some cities have shifted focus to removing statues and symbols of racist figures.

Also in Richmond, protesters marked a large monument dedicated to Confederate Gen. Robert E. Lee, who has been at the center of many monument conversations since 2017. Virginia Gov. Ralph Northam said Thursday the state would remove the monument.

Confederate flags and monuments have been criticized for their representation of racism in the U.S., especially in the South.

Protesters in other countries have taken similar action against public monuments of racist figures. In the U.K., protesters went as far as to remove a statue of slave trader Edward Colston and throw it into a nearby harbor.

The U.S. Marine Corps released a directive Friday that all public displays of the Confederate battle flag would be banned at its bases and offices, effective immediately. The directive applies to decorations, bumper stickers and more.

While the decision was made in April, Gen. David Berger, who issued the directive, said George Floyd's death was a reminder that the removal of the flag was not enough and that "we also must strive to eliminate division itself."