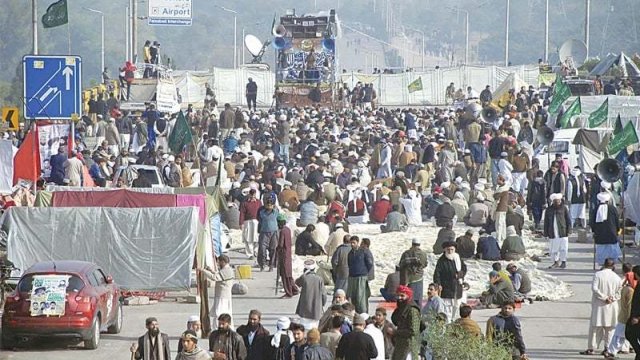 Starting earlier this month, protesters blocked a main highway into the capital city Islamabad and called for the country's law minister to resign.

Pakistan's government made a deal to appease Islamist protesters and end a weekslong protest that recently turned deadly.

The deal included the resignation of the country's law minister. Hard-line religious leaders accused him of blasphemy after a change to lawmakers' oath of office removed a declaration of Muhammad as God's final prophet. That change was quickly undone and blamed on a clerical error, but Islamist clerics called on their supporters to protest.

Starting earlier this month, protesters blocked a main highway into the capital city Islamabad and called for the country's law minister to resign.

Clashes between protesters and thousands of police and paramilitary forces left at least six protesters dead and more than 200 injured. The government called for Pakistan's powerful military to step in, but army leaders refused to use force; that led to the agreement to end the protest.

As part of that agreement, religious leaders agreed not to issue a fatwa against the law minister; blasphemy is listed as a capital offense in Pakistan and those accused can often face mob violence and even death. The government agreed to release protesters in custody within three days and to pay for any damages caused during the protest.

The agreement also included an investigation into what led to the change to the oath of office.

Hariri previously announced he would resign on Nov. 4 while he was in Riyadh, Saudi Arabia.

Pakistan holds elections in 2018. Some worry the agreement will weaken the ruling party and bolster hard-line religious leaders.