This Movement Wants Amazon To Know Its Headquarters Isn't Welcome 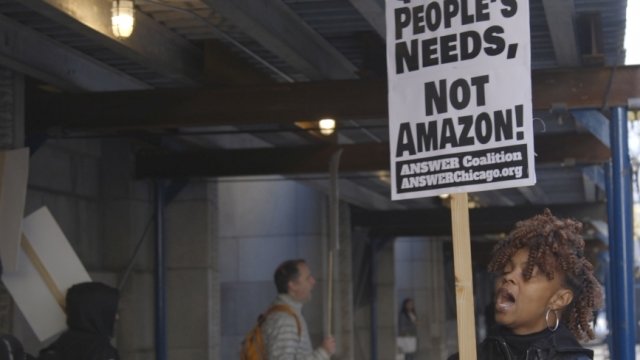 SMS
This Movement Wants Amazon To Know Its Headquarters Isn't Welcome
By Melissa Prax
By Melissa Prax
January 22, 2018
Chicago is one of the cities Amazon recently named as a finalist in its search for a second headquarters location.
SHOW TRANSCRIPT

Amazon is narrowing down locations for its second headquarters, and city and state officials have been eager to lure in the tech giant.

Chicago is one of the 20 locations deemed a finalist. But not everyone there wants Amazon as a new neighbor.

"We feel like if we can keep Amazon out, that is a huge victory and demonstrates sort of the power of people coming together, being able to say no to things like gentrification and corporate subsidies," Elias Rodriguez, a member of Answer Chicago, said. 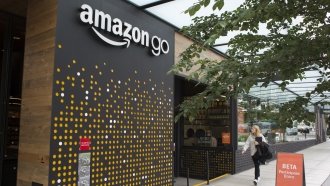 Chicago is one of the larger cities bidding for the chance at Amazon. And the bid comes with substantial incentives. Local Chicago media report tax breaks and other incentives will be around $2 billion.

Protesters we talked to say that money could be better spent elsewhere.

"This is, of course, the same city that has not enough money for education and is closing health clinics on the South Side. And we don't think that massive corporate handouts should be given by a city that claims to not have enough money for essential services," Patrick McWilliams, a member of Answer Chicago, said.

Proponents of the headquarters are expecting high-paying jobs — as many as 50,000. Some economists say whichever city Amazon chooses could also see an economic impact of around $50 billion.

"We're not against, obviously, jobs; we think people should have jobs and need jobs. The jobs that Amazon is bringing here, they're not going to be for working-class people. They're basically going to be office jobs for people that they are going to bring in from other cities to push out existing residents," McWilliams said.

"We say we don't want Amazon here, but of course we realize wherever Amazon goes, these same dynamics, these same problems are going to arise. So we stand in solidarity with any other city who's also resisting Amazon coming to their city," McWilliams said.

Amazon says it will make its decision on a finalist this year.