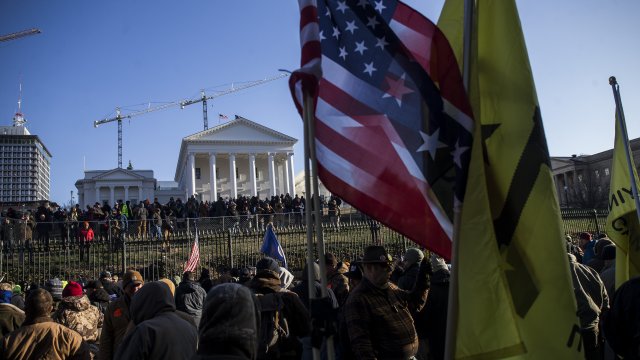 Thousands of protesters from all over the country gathered in Richmond, Virginia, in opposition to Gov. Ralph Northam's proposed gun control legislation.

Protester Manny Vega said: "All of us are here protesting for the right to bear arms. All we want to do is be able to defend ourselves."

"There might be left, far right and far left groups that might be out here today. But the vast majority, the message is guns save lives. And we believe in the Second Amendment," protester Sean Restatter said.

The Virginia Citizens Defense League organized the rally to protest a number of bills introduced by the Virginia General Assembly and backed by Northam. The proposals would ban assault weapons, bump stocks and silencers; require universal background checks; introduce a so-called "red flag" law; and cap gun purchases to one per month.

In his State of the Commonwealth Address earlier this month, Northam said: "This common sense legislation doesn't violate the 2nd Amendment. No one is going door to door to confiscate guns."

Ahead of Monday's pro-gun demonstrations, Northam declared a state of emergency and banned weapons of any kind on the state Capitol grounds until Tuesday.

A heavy police presence is on the ground to enforce that ban and help ensure the demonstrations remain peaceful.