Peaceful Protesters Block Streets In Armenia's Capital After A Vote 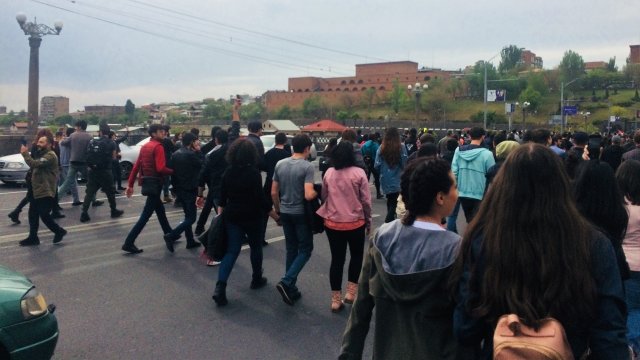 SMS
Peaceful Protesters Block Streets In Armenia's Capital After A Vote
By Katie Cammarata
By Katie Cammarata
May 2, 2018
Protesters blocked streets in Yerevan, the Armenian capital, after a parliamentary vote for an interim prime minister was inconclusive.
SHOW TRANSCRIPT

Protesters blocked most of the streets in Armenia's capital Wednesday.

This comes after opposition leader Nikol Pashinyan lost his first bid to be the country's interim prime minister after the former PM resigned.

Here's some background: Serzh Sargsyan had been president of Armenia since 2008. In April this year, just days after his presidential term was up, Sargsyan was elected Armenia's prime minister.

Then, anti-government protesters took to the streets and demanded his resignation. After more than a week of protests, Sargsyan stepped down.

On Tuesday, the country's parliament voted for an interim prime minister. But Pashinyan didn't have enough votes to win the seat since Sargsyan's party still controls a majority of parliament.

After that parliamentary vote went nowhere, Pashinyan called for a "nationwide day of action."

And that brings us to Wednesday's peaceful protests. People danced in the streets and blocked roads to Yerevan's main airport.

Armenia's parliament will vote for an interim prime minister again on May 8.