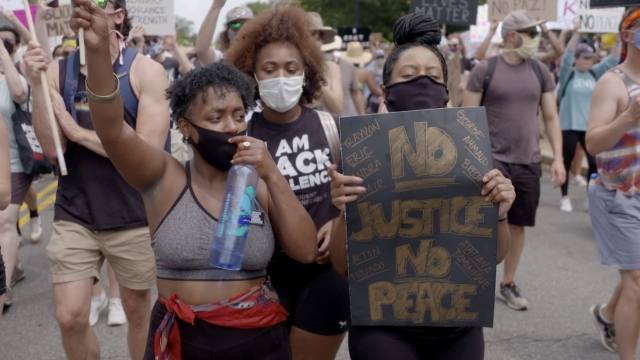 Saturday marked the largest day of demonstrations Washington D.C. has seen since the death of George Floyd in police custody May 25.

After more than a week of protests in the nation’s capital, Saturday marked the largest day of demonstrations the district has seen since the death of George Floyd in police custody May 25. Floyd's death has united a movement, calling for change in American policing and equality under the law.

Mcrae and Joshua Humbert brought their four-year-old daughter Sasha to Washington, D.C. to teach her a lesson that even at her age, they believe will stick. Mcrae says her family had "the talk" with her about police brutality as early as she can remember.

Federal agents, D.C. police and members of the U.S. Army patrolled the peaceful protesters coming from essentially every part of the district. At times, people plead with law enforcement, to see their pain. Tyree Williams, who comes from a military family, wanted the officers to see their similarities.

"He's a human being just like we are, and I want him to go home, just like I want to go home," said Tyree Williams. "They don't wanna be out here doing this. I need them to know in order to fight the system, they gotta turn the system back around."

But what they all want, is more than just protests to continue. They want action.

"You have to keep running the race to make the change. It may be small, it may be little but history always repeats itself. We're not going backwards. We're going forward," said Humbert.

Protesters made their way here to the White House, but because of the wall, they're no where close to the president.

House Democrats are set to unveil a police reform package Monday, Congresswoman Rosa DeLauro, who joined protesters, says that while some pieces of legislation may be ideals introduced in years passed she believes this time, they’ll stick.

But those here know, things won't change over night.

"If we steady the course we will see the change that our grandfathers fought for," Humbert said. "Police brutality has to end. We need to stay vigilant not just now, but for decades to come."