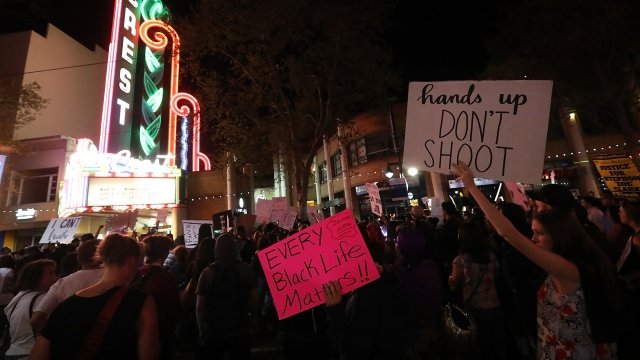 A woman sustained minor injuries after a sheriff's vehicle hit her during a protest of the shooting death of Stephon Clark in Sacramento, California.

Video obtained by CNN shows law enforcement vehicles surrounded by protesters on the street. Then, suddenly, one of the vehicles accelerates and hits a woman walking in front of it.

The Sacramento County Sheriff's Department said in a statement the vehicle was "traveling at slow speeds" and that the woman was taken to an area hospital for treatment.

A bystander told CNN the vehicle "accelerated very fast ... not the way you would move with people around."

The sheriff's department said the vehicle also sustained "scratches, dents, and a shattered rear window" from protesters "pounding and kicking" the vehicle.

The sheriff's department is conducting an internal review into the incident, and the California Highway Patrol is investigating the collision.