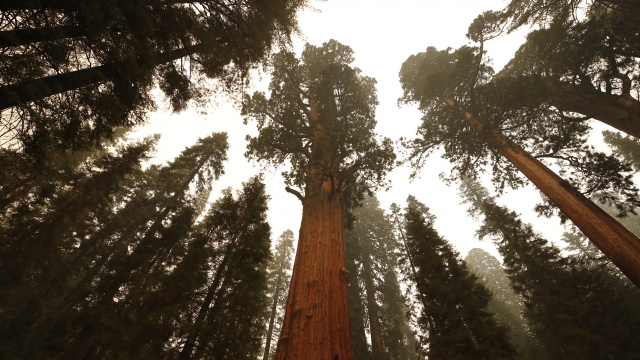 The Sequoia and Kings Canyon national parks' leading expert on these trees explains why they're so important to try to save.

They're among the oldest and most giant living things on Earth: sequoias. A national treasure under threat from an extreme fire — the KNP fire — which is why the U.S. Forest Service has taken extreme measures to save them. It's wrapping some of the most famous sequoias.

"We also had sprinklers on here that were spraying water all the way to the top of this cat face, wetting down the wood," chief of resource management Christy Brigham said. "And then they raked back and moved the heavy fuels, the big logs away."

Brigham, the leading expert at Sequoia and Kings Canyon national parks, is standing in front of the General Grant — the second-largest tree in the world. The fire never reached it and it now appears to be out of the woods.

JASON BELLINI: "How many sequoias do you think ultimately will die because of this fire?"

CHRISTY BRIGHAM: "I have no idea. I wish I knew."

BELLINI: "Could it be in the hundreds?"

BRIGHAM: "It could be. It might be less than that. I really don't know."

She doesn't know because most of the sequoia groves are in dense wilderness areas where, in some spots, the fire is still burning. And even ones that appear from a distance to be OK may still die.

BELLINI: "If the canopies burn, then the trees die. Do I have that right?"

BRIGHAM: "Yes. Let me give you a little bit of a nerd nuance ... If 90 to 100% of the canopy scorches and the needles are heated and killed, that can also kill a giant sequoia."

Brigham knows this all too well.

Until the Castle Fire, experts didn't know the extent to which giant sequoias, also known as monarchs, were vulnerable to today's megafires.

BELLINI: "They, in fact, need fires in order to reproduce. Correct?"

BRIGHAM: "Correct. And I don't want anyone to walk away from this fire thinking that sequoias aren't amazing and tough because they are. You don't live to be 2,000 years old by being a weakling. They need fire to grow the next generation of monarchs, so they have very thick bark that protects them from heat. The cones actually need heat from fire to open and release the seeds. But we have pulled some changes on them."

BRIGHAM: "Yep, we suppressed all lightning, the majority of lightning fires, and removed cultural and tribal burning for 100 years. So we removed those frequent fires. The forest got more dense, It got full of ladder fuels, and then we turned up the heat and the drying, with climate change driving hotter droughts capable of getting into the canopy and incinerating 1,000- and 2,000-year-old trees."

This part of western California is in a seven-year drought. Brigham said when the KNP Fire reached this area, she smelled trouble.

BRIGHAM: "I knew that this grove was at risk. I cried. And it was terrible. So it's a huge relief to see to see all these standing sequoias and know a lot of this grove is going to be fine."

BELLINI: "But there also is a lot that may not be alive?"

BRIGHAM: "There will be losses."

We'll know the numbers eventually, but the loss to people like Brigham who cherish these trees is incalculable.

"They make me feel like I'm standing in the presence of immortality," she said.