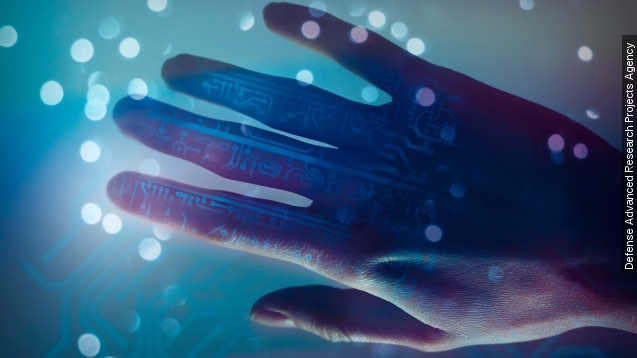 SMS
Prosthetic Hand Gives Sense of Touch, Controlled By Brain
By Ryan Biek
By Ryan Biek
September 14, 2015
Researchers have developed a prosthetic hand that connects to the brain via electrodes and gives the wearer a sense of touch.
SHOW TRANSCRIPT

A man who's been paralyzed for over a decade just became the first person capable of "feeling" physical sensations through a prosthetic hand directly linked to his brain.

A report from the Defense Advanced Research Projects Agency (DARPA) says electrodes were placed in the participant's sensory cortex, which detects sensations like pressure, and in his motor cortex, which controls movement.

The man's identity is being kept a secret, but he was reportedly able to control the hand through brain signals, like another individual shown here. Researchers at Johns Hopkins University provided the mechanics, and have been working with DARPA on this program since 2006. (Video via The New York Times)

The participant in the most recent study was also able to say which finger, or in some cases fingers, on his prosthetic hand were being touched while he was blindfolded.

Earlier this year, Swiss and Italian researchers created a prosthetic hand capable of feeling, but they planted electrodes in the participant's arm. The most recent study by DARPA and Johns Hopkins is the first to plant electrodes in the brain. (Video via École Polytechnique Fédérale de Lausanne)