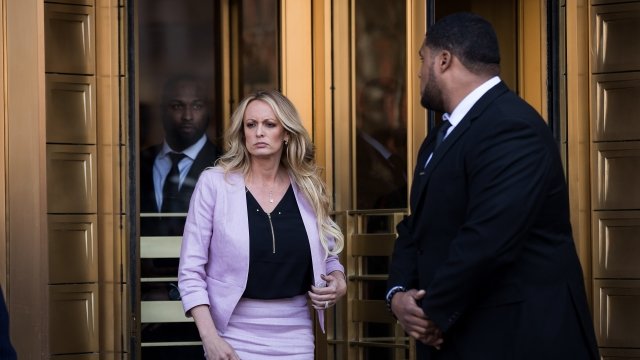 Her attorney, Michael Avenatti, announced the cancellation in a late-night tweet Sunday.

That's according to her attorney, Michael Avenatti, who announced the news in a late-night tweet on Sunday.

Avenatti claimed the U.S. attorneys office canceled the meeting because of media attention.

Prior to the cancellation, an unnamed source told The Washington Post that Clifford was going to meet with federal persecutors Monday in New York to answer questions about Michael Cohen.

Clifford was reportedly going to be questioned about the $130,000 payment she received from Cohen in 2016. He made that payment in an effort to keep Clifford quiet about an affair she alleges she had with President Donald Trump more than a decade ago. Trump's repeatedly denied the allegations.

In an email Avenatti said he sent to federal prosecutors, he called their decision to cancel the meeting "ridiculous." He continued, "We do not think it was any secret that at some point you were going to meet with my client."

As of early Monday, the U.S. attorney's office had not commented on either the scheduled meeting or its cancellation.