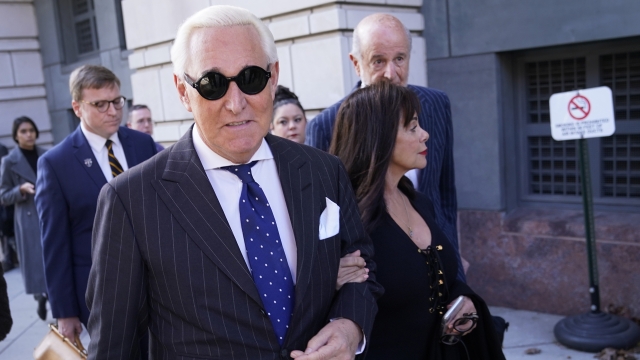 SMS
Prosecutors Recommend That Roger Stone Serve Up To 9 Years In Jail
By Ahmed Jawadi
By Ahmed Jawadi
February 10, 2020
The president's longtime associate was convicted of lying to Congress, witness tampering and obstructing a congressional committee proceeding.
SHOW TRANSCRIPT

Federal prosecutors have asked a judge to sentence Roger Stone to up to nine years behind bars.

In a sentencing memo filed Monday, prosecutors recommended Stone serve between 87 and 108 months in prison and said that sentence was in line in with federal guidelines. They argued in the filing that Stone knew he was breaking the law, saying: "Stone's actions were not a one-off mistake in judgment. Nor were his false statements made in the heat of the moment. They were nowhere close to that."

Stone, a longtime associate of President Donald Trump, was convicted last year on all seven counts brought by the Justice Department, including lying to Congress, witness tampering and obstructing Congress' investigation into Russian interference in the 2016 election. He maintained his innocence throughout the ordeal.

Stone is scheduled to be sentenced Feb. 20. According to the Washington Post, his defense team will probably file its sentencing recommendation the Monday before.