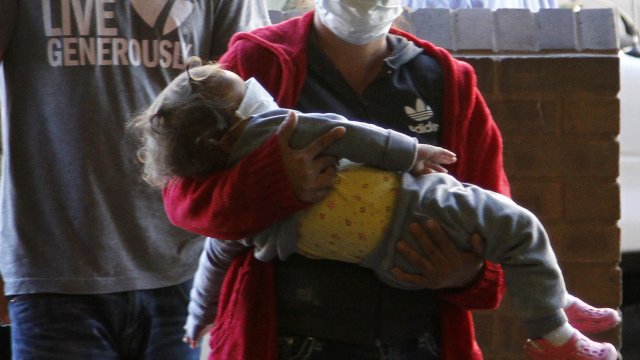 Elected officials around the country are imploring — even requiring — people to stay at home or avoid gatherings of 10 or more people to slow the spread of the coronavirus.

But the federal government waited until Tuesday evening to close 10 of the nation's 68 immigration courts and postpone nationwide hearings for non-detained immigrants. It had already closed the court in Seattle.

"These courtrooms are tight quarters. They don't have windows, they don't have any ventilation. And usually, you're sitting in there with between 50 and 100 people at a time because the respondents come with their attorneys, with the family members, with the witnesses," said Fanny Behar-Ostrow, president of the union that represents  ICE prosecutors.

In an unprecedented show of solidarity, ICE prosecutors, immigration judges and immigration lawyers are urging the Trump administration to close all courts "to protect the health and safety of the ... staff, and the public that we serve." Newsy interviewed union and association leaders for all court parties.

"Your employer is telling you that you have to go into work, business as usual. And at the same time, you are learning through the media that this virus is spreading like wildfire and that the possibility of being exposed by being in a courtroom full of people is large," Behar-Ostrow said.

"We're asking for a period of two to four weeks to provide for testing in this country to catch up to the need to have protocols in place to screen individuals before they go into the courtroom," said Jeremy McKinney, second vice president of the American Immigration Lawyers Association.

In a joint statement published Sunday, judges, along with ICE and immigration attorneys, acknowledged that closing the courts "will impose significant hardship" for the government, asylum-seekers and detained immigrants. But they also endorsed the use of telework and videoconferencing to continue the courts' most pressing cases.

Dana Marks, the president emerita of the National Association of Immigration Judges, said: "We understand the government has an interest in making sure that people who are not here with proper status and may not have a right to remain go through the process and are required to leave. We're also very aware that there are people who are entitled to some kind of status. And when we shut down we're not able to give them the status and the security that they are entitled to. We're aware of both sides of that argument, but the scientific evidence seems to be extremely persuasive."

The Department of Justice, which oversees immigration courts, tells Newsy it decided to close some immigration courts and postpone all non-detained hearings through April 10 due to its "continuing evaluation of information from local, regional, state, and federal officials regarding the coronavirus pandemic."

These closures and postponements will significantly decrease traffic in the courts. But for those still required to show up, it's not enough.

"That's a small step in the right direction, but it's just not nearly enough. It's really not necessary for the courts to remain open and expose everyone to this health hazard," said Behar-Ostrow.