Prosecution Rests In Trial Of Men Who Chased Ahmaud Arbery 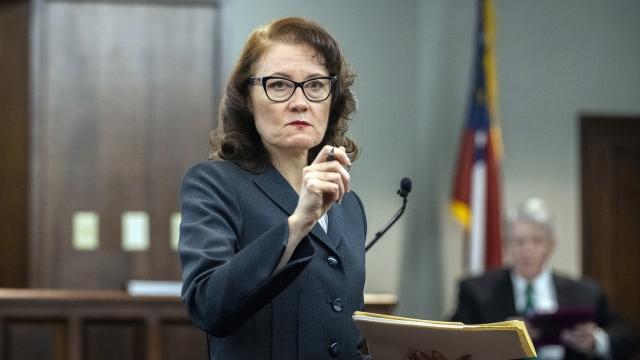 Prosecutors rested their case Tuesday in the trial of three white men charged with chasing and killing Ahmaud Arbery after the jury saw graphic photos of the shotgun wounds that punched a gaping hole in his chest and unleashed bleeding that stained his white T-shirt entirely red.

Prosecutors called 23 witnesses during eight days of testimony. They concluded with Dr. Edmund Donoghue, the state medical examiner who performed the autopsy on Arbery's body, followed by the Georgia Bureau of Investigation's lead investigator in the case.

Donoghue testified that Arbery was hit by two of the three shotgun rounds fired at him. He said both gunshots caused such severe bleeding that either blast alone would have killed the 25-year-old Black man.

The first shot at close range tore through an artery in Arbery's right wrist and punched a big hole in the center of his chest, breaking several ribs and causing heavy internal bleeding, Donoghue said. The second shot missed entirely. The third shot fired at point-blank range ripped through a major artery and vein near his left armpit and fractured bones in his shoulder and upper arm.

"Is there anything law enforcement or EMS could have done to save his life at the scene?" prosecutor Linda Dunikoski asked.

"I don't think so. No," Donoghue replied.

Donoghue performed an autopsy on Feb. 24, 2020, the day after Arbery was slain. The jury saw close-up photos of his injuries, which included several large abrasions to Arbery's face from when he fell facedown in the street following the third gunshot. Photos of his clothing showed his T-shirt turned red with blood. Cellphone video of the shooting shows it had been white.

Asked by the prosecutor how Arbery was able to fight back after sustaining such a severe chest wound from the first gunshot, the medical examiner called it a "fight or flight reaction" that raised his heart rate and blood pressure while sending adrenaline coursing through his body.

Father and son Greg and Travis McMichael armed themselves and pursued Arbery in a pickup truck after spotting him running in their neighborhood. Their neighbor William "Roddie" Bryan joined the chase and took cellphone video of Travis McMichael shooting Arbery. All three men are charged with murder and other crimes.

The McMichaels told police they chased Arbery suspecting he was a burglar after security cameras recorded him several times inside a home under construction, five houses away. Defense attorneys say the younger McMichael fired his gun in self-defense after Arbery tried to take it from him.

Prosecutors say they chased Arbery for five minutes to keep him from leaving the Satilla Shores subdivision outside the port city of Brunswick. The chase ended when Arbery, trailed by Bryan's truck, tried to run around the McMichaels' truck as it idled in the road ahead. The video shows Travis McMichael confronting Arbery and then shooting him as he throws punches and grapples for the gun.

Robert Rubin, one of Travis McMichael's attorneys, noted that the medical examiner wrote in his report that Arbery died from wounds "sustained during a struggle for a shotgun."

"Were you aware that Mr. Arbery had his hand on the gun?" Rubin asked Donoghue, who answered that he was.

Despite the gunshot to his right wrist, Rubin said, "nothing prevented Mr. Arbery from holding the gun with one hand and swinging and punching with the other hand."

GBI agent Richard Dial, who led the investigation into Arbery's death, showed the jury maps of the neighborhood where the shooting occurred and a drone video tracing what authorities believe was the path of the chase that ended in the killing. Dial also briefly reviewed the cellphone video of the shooting itself.

Bryan's attorney, Kevin Gough, asked the investigator whether he agreed that Bryan's video of the shooting was "consistent with someone who was a witness" to the chase rather than participant.

"He wasn't a witness," Dial replied. "It would be consistent that he was still pursuing Mr. Arbery, trying to box him in between two different vehicles."