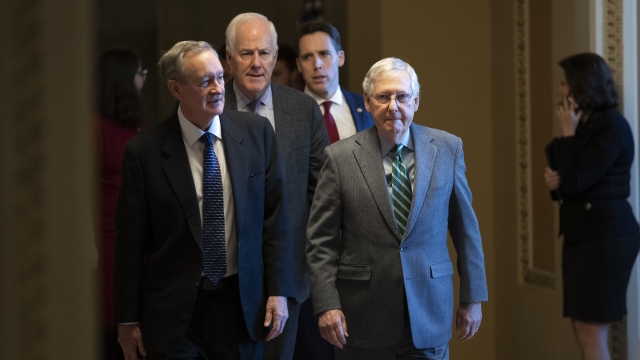 SMS
Proposed Impeachment Trial Rules Cut Number Of Opening Argument Days
By Stephanie Sandoval
By Stephanie Sandoval
January 20, 2020
The Senate will vote on the rules Tuesday, and the majority leader has said he has enough votes to pass them without support from Democrats.
SHOW TRANSCRIPT

McConnell has said his proposed rules would follow the precedent set during President Bill Clinton's impeachment. Each side will get the same number of hours as in Clinton's trial — but instead of dividing those 24 hours over three days, they will only have two days to make their cases.

After that, senators will have 16 hours to ask questions, and then the Senate will have four hours to "to consider and debate under the impeachment rules any motion to subpoena witnesses or documents." If the Senate votes to allow witnesses, those witnesses would have to be deposed before the Senate decides which ones will testify. Clinton's trial did allow for witnesses. The organizing resolution does not mention a motion to dismiss the impeachment articles, unlike in the Clinton trial.

Senate Minority Leader Chuck Schumer called McConnell's proposed rules "a national disgrace" in a statement Monday night. He said: "Senator McConnell repeatedly promised Senators, the public and the press that his rules for the trial would be the same as the rules for President Clinton's trial. After reading his resolution, it's clear Senator McConnell is hell-bent on making it much more difficult to get witnesses and documents and intent on rushing the trial through."

Schumer said he would offer amendments on Tuesday to "address the many flaws in this deeply unfair proposal and to subpoena the witnesses and documents we have requested." Senate Democrats want to hear from four witnesses, including former national security adviser John Bolton.

McConnell has said the Senate will vote on the rules on Tuesday and that he has enough votes to pass the rules without the support from Democrats. Arguments will start Wednesday.

Correction: A previous version of this story incorrectly said the Clinton impeachment trial opening statements took place over four days. This story has been updated.