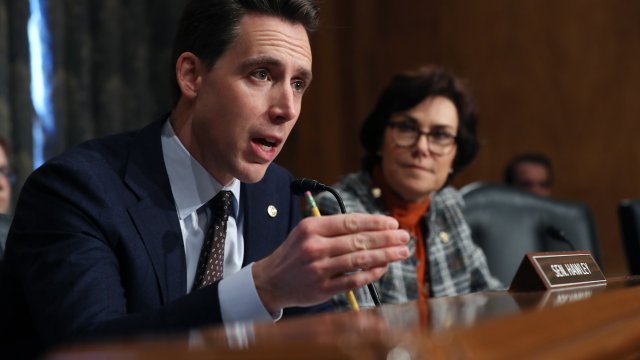 Republican Sen. Josh Hawley has introduced a resolution that could let the Senate dismiss articles of impeachment against President Donald Trump.

The resolution would amend Senate rules on impeachment to allow a motion to dismiss articles that are not prosecuted quickly enough.

In a statement, Hawley called President Trump's impeachment "bogus" and said, "If Speaker Pelosi is afraid to try her case, the articles should be dismissed for failure to prosecute and Congress should get back to doing the people's business."

The House voted to impeach President Trump on Dec. 18, but House Speaker Nancy Pelosi has still not sent the articles to the Senate for a trial.

The resolution would let the Senate move to dismiss any articles for lack of prosecution if the articles are withheld for 25 calendar days "from the date of adoption." Any senator would be able to initiate that process. The bill has 10 Republican co-sponsors.

"The articles don't even allege a crime," Hawley said. "First time in American history: Impeachment of a president where no crime is even alleged in the articles, no evidence of a crime even presented. No wonder she doesn't want to have a trial."

Pelosi has said she won't send the articles to the Senate until the upper chamber shows it will hold a fair trial that includes witnesses and blocked documents.

Former national security adviser John Bolton has already said he is willing to testify if he's subpoenaed by the Senate — even though he didn't make an appearance during the House's inquiry. Remember: Bolton was in the room when President Trump made the July phone call to Ukraine's president that led to the impeachment inquiry.

On Tuesday, Senate Majority Leader Mitch McConnell said he has enough votes to approve the rules for the Senate trial. Those rules don't include calling witnesses initially, but he said senators could decide to call witnesses in later phases of the trial.

So, what now? Hawley's resolution needs 67 votes to pass, but the Senate currently has 53 Republicans. Hawley has suggested Republicans could bypass that rule to adopt the resolution with just 51 votes, but it's not clear if that's allowed. The resolution is aimed, in part, to pressure Pelosi to send the articles, but so far she hasn't indicated that she's ready to move any quicker.